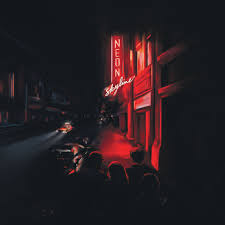 Canadian indie-singer/songwriter Andy Shauf possesses the very definition of the light touch, and that light touch - from his classically plaintive, twee vocals, to his preference for woodwinds over brass when he wants to amp the instrumental palette, to his tiny, intimate, conversationally told album-long tale of a guy who joins friends at a bar only to learns his old flame is back in town and about to join them - is on full display on his charming 2020 release The Neon Skyline.

But that light touch and the small scale of the narrative should in no way imply The Neon Skyline is a shallow, surfacy listen.

To the contrary, with repeat listens, numerous humorous and emotionally impactful moments emerge, and Shauf's lyrical skill depicting conversation between friends - or their inability to effectively converse even while intuitively grasping each other's every predilection and foible - pays great dividends the more one digs in to the conversational nuances, and is as critical here to the album's effectiveness as in celebrated late-night conversation-dominated films like My Dinner With Andre or The Big Chill.

A one man show (Shauf produced, engineered, and played every instrument), and consistent in its gentle tone, The Neon Skyline won't be of much interest to those who gravitate towards harder hitting rock, metal, or hip-hop, but those who like indie with a heavy dose of melancholic, self-deprecating intimacy should definitely check it out.

Here's the official video for my favorite track from the album, Try Again, which occurs right when the narrator's ex joins the party.