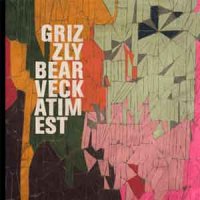 .  For those first sixty seconds, Grizzly Bear lays down what seems certain to become the folk-rock song of the year...an unbelievably cool, late-night acoustic groove tied to an awesome melodic vocal that gets even better when killer backing vocals kick in at around forty seconds. But then, at that one minute mark, just as you think the song is going to rise up in a huge, harmonic chorus, it instead shifts abruptly into an adventurous four minute prog-rock excursion utterly disconnected from that amazing opening, never to return.
And even though those final four minutes can feel like a bit of a letdown (though exciting on their own, they're not near as good as that stunning opening), they demonstrate Grizzly Bear's courageous willingness to kill their darlings midstream in the search of something even better, and it's this unwavering fearlessness that makes Veckatimest, at least for me, the best album of 2009.
Sometimes you go with consistency, sometimes you go with high points.  Veckatimest definitely falls into the second category.
It's not nearly as consistent as other top 2009 albums like Animal Collective's Merriweather Post Pavillion

self-titled debut, but where each of those albums basically takes one great approach and rides it out through minor variations for the duration, Veckatimest is a non-stop parade of daring change-ups and unexpected instrumental juxtapositions...there's dozens of new ideas at play here, they don't all work, but several do, at the highest possible level.
In a very real sense, you could call Veckatimest the OK Computer

, to the odd, enthralling rhythm guitar work of About Face

, Veckatimest is that type of record that's constantly swinging for the fences and always challenging itself.
It's not an album for everyone...there's a definite wimp factor at play whenever male-led bands go all out for moments of beauty, as Grizzly Bear does here in spades, and the band's idiosyncratic, herky-jerky rhythms can take some getting used to...but overall all, if you're up for checking out the most recklessly daring album of the year, even though it's a mellow, artsy one, Veckatimest is the album for you.
Status: Highest Recommend.
Cherry Picker's Best Bets: Southern Point

, While You Wait For The Others

- 8
Intangibles - High.
To Listen, Download, or Buy a Vinyl or CD Hardopy,
Click on the Widget Below.
What did you think of Veckatimest? Let readers know in the comments section.﻿
Posted by McQ at 8:00 AM No comments: