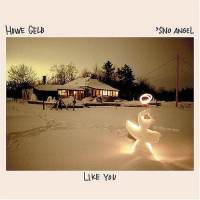 What are your thoughts on Howe Gelb's 'Sno Angel Like You?  Let readers know.
Posted by McQ at 8:00 AM No comments: