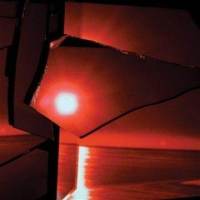 Mellower and decidedly more "middle-aged" than previous efforts, it's hard to not be a touch disappointed with TV On The Radio's Nine Types Of Light on first listen.
All of the band's trademark appeal is present...the passion, the inventiveness, the unpredictable blend of soul and art-rock influences, Kyp Malone and Tunde Adebimpe's wonderfully idiosyncratic vocals...but compared to their previous two celebrated releases, Nine Types Of Light just doesn't seem up to snuff,  lacking Return To Cookie Mountain's

non-stop, party-funk awesomeness.
But then the album's lyrics start sinking in, and Nine Types Of Light begins to assert itself.
It's hard not to envision the combination of bassist/keyboardist's Gerard Smith's terminal battle with lung cancer (he passed just weeks after the album's release) and the band's decision to record in Los Angeles instead of their native New York as having dominated the record's formation.
Musically, Nine Types Of Light feels saturated in laid-back California sunshine, while lyrically, this is without question TV On The Radio's most elemental and direct album, obsessed with themes of simple human connection, love, perserverance, and an acceptance of life's fleeting duration.  In those brief instances when politics/world events do enter the conversation, as on No Future Shock, the album's liveliest track, it's as background noise to be ignored, not problems that need to be addressed.
In many ways, whether a legitimate interpretation or not, the album plays as an elegy to Smith, but one written with his full participation while he was still alive, full of gentle positivity and calm resignation as opposed to grief and sorrow, a proactive choice on the band's part to share their dear friends final days with him, and help him to make his transition with grace, dignity and humor.  Killer Crane, the record's beautiful, allegorical centerpiece,  takes on special power when considered in this light, but many of the album's other tracks, whether spirited or relaxed, have a similar bittersweet, heartwarming impact.
So while from a strictly musical standpoint it may not quite rise to the level of TV On The Radio's last two releases, Nine Types Of Light is nonetheless a highly satisfying listen, suffuse with a quiet, uplifting power uniquely its own.

Here's the official video for the ballad Killer Crane, my favorite video of the year, which perfectly captures the warm sense of shared existence and cherished small moments that permeates the album.


What are your thoughts on TV On The Radio's Nine Types Of Light?  Let readers know!