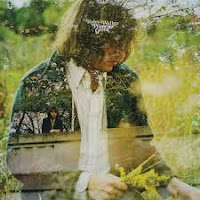 And to a degree, Walker succeeds in carrying the torch of these past greats.

He has definitely developed a fine 60s folk rock sensibility, the album's instrumentation is gorgeous and lush throughout, the playing first rate, and on first listen, his singing and phrasing feels right out of the Tim Buckley playbook.

But with repeat listens cracks do develop in the album's nylon-strung armor.

For one, while definitely a solid singer in his own right, Walker can't quite compete with the vocal power, crystal clarity or operatic virtuousity of the Buckleys.  Normally this would not be an issue, as "not as good" as two of the most naturally gifted singers in pop music history leaves plenty of room to still be great, but because Walker so directly emulates their singing style, a comparitive sense of warm Springsteeny blandness, as on only get "two-thirds of the way there to Buckley-Nirvana" tracks like Summer Dress, is the end result.

More significantly, while showing tremendous sensibilities as an arranger, Walker's songwriting is nowhere on par with the legends from whom he draws inspiration. Most of the tracks make a strong opening impression but quickly start to feel meandering, and those tracks with the sparest instrumental arrangements that lean on Walker's songwriting chops the most, particularly the homey On The Banks Of The Old Kishwaukee and closer Hide In The Roses, fare the worst.

That said, even though there are several moments on this album that suggest a not quite ready for prime time, Old Town School Of Folk Music striver, many others suggest a ton of promise.

Best of the bunch is Sweet Satisfication, a searing, aggressive, Starsailor-like number that is the album's high point on every level - musicianship, singing, songwriting - and one of my favorite tracks of the year. Other highlights include the more Nick Drakian opener Primrose Green, Same Minds, Love Can Be Cruel, and the gorgeously melancholy The High Road.

So while not a glowing review here, I do want to restate that Walker is a still young artist with a lot of potential exploring musical territory that's been all but forgotten by most of his contemporaries.

I hope he can keep it up, and if he can just sharpen his songwriting a touch going forward, he seems to have the potential to deliver something genuinely fantastic down the line.

Here are videos for Primrose Green and The High Road.