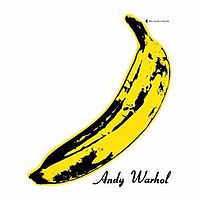 Let's set the record straight.
The Velvet Underground And Nico is not one of the greatest and most influential rock albums of all time.
It is THE greatest and most influential rock album of all time!.
What Lou Reed, John Cale, Maureen Tucker, and Sterling Morrison (with an assist from Andy Warhol and German model/actress-turned chanteuse Nico) created here with these eleven songs was, and continues to be, better, more exciting, and more singularly impactful than any single album in Bob Dylan's catalog, or the Beatles', or the Stones', or Springsteens', or Elvis's, or Chuck Berry's, or Marvin Gaye's, or Radiohead's, or The Clash's, or Aretha Franklin's, or Prince's, or Led Zeppelin's, or David Bowie's, or Bob Marley's, or any other single album by any other top tier rock 'n' roll or R&B or hip hop artist you can name.
From its "proof is in the pudding" assertion that limited instrumental talent was no barrier to artistic communication, to its never-been-bettered sequencing, from its introduction of taboo subject matter, a detached reportial narrator, intentional off-key singing, unadulterated noise, the avant-garde, and unaccented rhythms into the rock 'n' roll equation, to the daringly aggressive conceptual lengths the band went to to give a cinematic, almost physical shape to each of these songs (Heroin, for example, rhythmically simulates a junkie's rush/nod cycle, as well as implying his weakening life force through heartbeat-like drumming and a wavering but unbroken viola drone), no other album in rock's history blew open so many genre conventions so completely.  And even though hardly anyone listened to it at the time of its inital release in 1967, vast swaths of the last forty years of punk, goth, new wave, and gritty art-rock are simply unimaginable without it.
It's never been an album for everyone, dissonant and jarring and diving head first into dark, detached, non-judgmental portrayals of drug addiction, S&M, the decadent rich, street violence, and sexual abuse, but for the last forty-four years, it's proven to be the ongoing holy grail of inspiration for anyone with a questing artistic spirit, an appreciation for ruthless honesty, and the desire to create something truly original.
Like other albums that make up my first brick for collectors, so much has already been written that I'll spare you any further commentary here.  Rolling Stone and the All Music Guide both have fantastic reviews that are just an internet click away.  But I will leave you with one final thought.
If you haven't purchased this album before...try to get the original mono mix.  Certain songs, particularly I'm Waiting For My Man, lost a lot of their punch when they were remastered in 1984.
Status: Highest Recommend.
Cherry Picker's Best Bets: Sunday Morning

, I'm Waiting For My Man

.
Here's a video for the album's most traditional rocker, the drug-scoring anthem I'm Waiting For My Man, set to footage Andy Warhol shot while the band was rehearsing at The Factory.

What are your thoughts on The Velvet Underground & Nico?  Let readers know!
Posted by McQ at 7:27 AM

It was fucking sick before sick was sick!!!

Yes it was! Well put.