ARE YOU EXPERIENCED - The Jimi Hendrix Experience (1967) 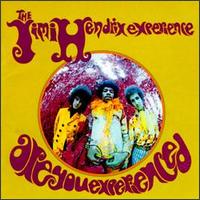 Rock 'n' roll has never had a "Citizen Kane" album, a singular work that comes out of nowhere and in one fell swoop blows open the creative possibilities of near every discipline associated with the craft.

But it did have a "Citizen Kane" year, 1967, and The Jimi Hendrix Experience's Are You Experienced, one of the two greatest debut albums in rock history, was THE primary contributor on the instrumental front.

In the years immediately prior to this album's release, musicians had begun to experiment with feedback (the opening moments to The Beatles I Feel Fine is a classic example), but that's all these initial efforts were...tentative, small scale experiments.

Then Hendrix arrived with this album...a fully formed, visionary master of guitar distortion...and the iconic sound of the psychedelic guitar was born.

It was a staggering template for a new sonic order.  As Hendrix himself proclaimed to his mid-sixties listeners in Third Stone To The Sun, "And you will never hear surf music again."

From Foxey Lady's heavy metal surge to Purple Haze and Third Stone To The Sun's drugged-out sheen, Red House's over-cranked blues to Fire's braggadocio soul, May This Be Love's wilting, high-volume balladry to I Don't Live Today's extended use of noise and drones, each and every song on Are You Experienced seemed to open the door to a previously unimagined musical direction.

And while, forty-plus years removed, many younger guitarists have gone on to surpass Hendrix in terms of sheer playing speed and range of technique, I have yet to hear another guitarist (with the possible exceptions of obvious devotees Stevie Ray Vaughn and The Stone Roses John Squire) who could match the fluidity and hypnotic grace with which Hendrix could shift between rhythm and lead runs, as The Wind Cries Mary and May This Be Love put on perfect display.

In addition to Hendrix's legendary pyrotechnics, both bassist Noel Redding and drummer Mitch Mitchell provide phenomenal support, Redding as the sole anchor of the rhythm section, Mitchell coloring in every hole left open in Hendrix's attack.  To this day, I still think Mitchell's frantic fills in Fire rank among the very best ever heard in a rock n' roll song.

But the thing that sticks with me most is that coming from an artist remembered for his flamboyant showmanship and extended jams...and one rarely celebrated as a singer or songwriter...Are You Experienced is one of the tightest and most jam-packed collections of A++ singles rock has ever produced...easily the equal of any album in the Beatle's or Stone's canon.

This is an album that should be a part of any serious listener's collection.

Initially released in significantly different forms in England and the U.S., Warners/Reprise did us all a favor a decade ago by combining the material from both releases, as well some B-sides, onto one CD.

Cherry Picker's Best Bets: Silly to cherry pick this album, which should be bought in full, but if forced to choose...Purple Haze

, May This Be Love

Here's a music only video for one of the least remembered but best tracks on album, May This Be Love.

What are your thoughts on Are You Experienced? Let readers know in the comments section below.
Posted by McQ at 7:27 AM