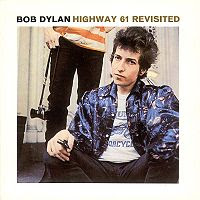 Released in the summer of 1965, Highway 61 Revisited was not the album that initiated Bob Dylan's public move towards electric rock n' roll (side one of 64's Bringing It All Back Home

had already taken care of that), but it was the album that solidified the move.

It is also the album that cemented Dylan's position as one of the most important and influential artists in rock n' roll history.

There's so much that's already been said, written, and discussed about this album...its ground-breaking, generation-defining songs, its politics, it wild surrealistic lyricism...that it seems silly to go into too much detail here.  Anyone looking for an in-depth analysis will have no trouble finding dozens with a quick Google or library search.

Instead, I'd just like to put forth my one simple reason why I consider Highway 61 Revisited to be Dylan's finest effort.

Regardless of where one thinks Highway 61 song's rank, this is the best Dylan has ever sounded!

original arrangement, but rather suggested by Kooper several takes into the recording process), and bookended, arguably, by the two greatest tracks in the entire Dylan canon (vicious break-up rant Like A Rolling Stone

He would go to produce several more classics, from the even broader-reaching follow-up Blonde On Blonde

to the searingly personal, divorce-fueled Blood On The Tracks, to his wonderful, late-career triptych of Time Out Of Mind

, but never again would he put out a release as cohesive, as hard hitting, as straight-up "quintessential" as Highway 61.

, and the hysterical Highway 61 Revisited

punch with a garage rockers force, Ballad Of A Thin Man's

instrumentation oozes with the unhinged, off-kilter dread it's clueless older protagonist is meant to feel, and Queen Jane Approximately

, and above all the aforementioned Desolation Row

offer gorgeous, flowing musical textures so strong in their own right the songs would lose little were the vocals and lyrics removed (which is not something you can say about most Dylan tracks).

So I stand by my assessment.

This is Dylan's best album...

...and one of the greatest albums in rock n' roll history.

, Ballad Of A Thin Man

- 10
Intangibles - Very High
To Listen, Download, or Buy a CD or Vinyl Hardcopy
Click on the Widget Below