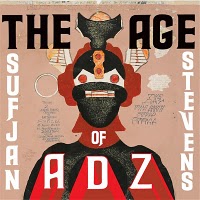 These are just some of the landmark errors in judgement that spring to mind whenever I listen to Sufjan Stevens's The Age Of Adz.

And while Stevens is hardly popular enough an artist for this work to reach the same level of cultural notoriety, The Age Of Adz is the exact same type of flamboyant misstep that only the genuinely ambitious and gifted...blinded by a self-confidence/sure-mindedness won through past success...can produce.

For like those other historic failures, there really isn't a questionable creative choice made on The Age Of Adz save one...the core idea that led to the project's creation in the first place.

"Let's make a hard-edge police procedural where the cops regularly break into song."

"Let's arbitrarily change the flavor of the world's most popular soft drink."

Or in Steven's case, "Let me take all these awful misogynistic and suicidal thoughts I've been having since the breakup of my last relationship and give them vent through a metaphorical exploration of the schizophrenic, woman-hating mind of African-American folk artist and religious crackpot Prophet Royal Robertson."

I know, sounds charming, but it's not the first time Steven's has taken this tack, and it's worked extraordinarily well for him in the past.

Check out the haunting John Wayne Gacy Jr. off of 2005's celebrated Illinois, where the openly Christian Steven's had the audacity to compare his positive qualities to the perceived positive qualities of the famed serial killer and then muse that "In my best behavior / I am really just like him / Look beneath the floor boards / For the secrets I have hid!"

That approach is repeated here, and while it feels like a stretch for Stevens to elevate merely being upset at his ex to the level of anger exhibited by the sign-maker Robertson, who after being left by his wife of nineteen years spent the rest of his life creating vivid paintings portraying women as ghoulish, cartoony, threatening science fiction monsters, the truth of the matter is from a simple songwriting level, this album works fairly well.

It's with Steven's decision to instrumentally suggest Robertson's schizophrenia by diving into chaotic electronica where everything falls apart.

It's a fully orchestrated, naturalistic, already overstuffed album in Steven's traditional vein, that's then had an additional layer of cheesy, Flash Gordon-esque elecro-beeps and farts slathered over the entire affair. And no matter how logical it might have seemed to suggest Robertson's schizophrenia in this way at the time, Steven's failed to take one thing into account when making this core creative choice...just how dopey and goddamn ridiculous the whole thing would sound in the end.

It's as if having already crafted an album that played fairly well, Steven's flew to England, tracked down a drunken Keith Emerson at some pub at 4 a.m., immediately dragged him into the recording studio and importuned..."Now give me some of that Karn Evil 9 shit!"

Still, as bad as most of these tracks play in their final form, The Age Of Adz rates, like Lou Reed's Metal Machine Music, as one of the more interesting failures in rock history, with a few of its tracks rising far above the din.

Futile Devices, the lovely opener, succeeds because it's designed as a feint, hewing closely to Steven's trademark sound of the past before the electronics kick in on second track Too Much.  The far too long but engaging closer Impossible Soul also works because of its more naturalistic sonic design.

The Idioteque-ish I Walked, and to a lesser degree Vesuvius, succeed for the opposite reason, being the two tracks that feel entirely electronic in nature.

And then there's I Want To Be Well, the album's one near masterpiece, and the one true success of this mergist style.  A terrifying cry for help from a suicidal mind, it builds to such a searing emotional climax with its desperate closing refrain of "I'm not fucking around" that no flaw in sonic design can stand in its way.

So in the end, as much as I personally disliked The Age Of Adz, it's hard to feel much in the way of anger or disappointment towards Stevens.  Far better to dare big and fail occasionally than play it safe.

He took a huge stylistic risk, saw it through to its natural conclusion, and in the end that risk didn't pay off.

But imagine if it had.

Here's the bizarre stop motion official video for Too Much which clearly conveys both the album's overwrought ambition and cacophonous sonic design.

What are your thoughts on this controversial album?  Let readers know!
Posted by McQ at 6:40 AM