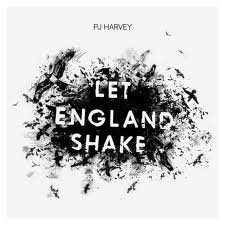 "War! What is it good for? Absolutely nothing! Say it again."

Somehow, it seems fitting that this review of PJ Harvey's Let England Shake follows my review of Sufjan Stevens's The Age Of Adz.  Both rate among the top-most exercises in artistic ambition rock has produced over the last few years, and taken together, the two albums perfectly illustrate the hair's-breadth difference between abject failure and glorified success when one follows one's muse.

Stevens makes one critical error in deciding to mirror his subject's battle with schizophrenia by adding a cacophonous layer of electronics to an already richly detailed work, and the whole affair collapses under the weight of its overstuffed design.

Harvey makes several equally unusual, potentially treacherous choices in her unflinching, despairing, time-traveling examination of war's impact on her beloved England...to sing exclusively in her odd, disembodied upper register to imply the sad but distant gaze of Mother Earth; to incorporate jarring, incongruous samples into her otherwise naturalistic songs to suggest the clash of cultures...but here the choices magically coalesce, resulting in a bona fide masterpiece.

Spare and folk-oriented in design, with the bulk of its instrumentation limited to simple acoustic or electric guitar lines, a touch of brass or keys, and a ubiquitous auto harp, Let England Shake is a moving, and consistently surprising musical experience.

But lyrically, it is not for the faint of heart.

Harvey takes on the subject from all sides in plain-spoken language and graphic detail...the clueless pols who make the decisions in The Words That Maketh Murder, the wailing mothers whose sorrow over children lost is matched only by their fervent willingness to continue the patriotic fight in England, the irreparable damage left in wars aftermath in The Glorious Land ("What is the glorious fruit of our land? / The fruit is deformed children!")...but the bulk of the album occurs in the trenches, as Harvey pit stops through time to visit several of the most horrendous battles in Britain's centuries long military history, and put us right alongside the common foot soldiers to share in their misery and terror.

Think of the album as the British, folk-rock equivalent to the most potent moments of Steven Speilberg's Saving Private Ryan, but with that flawed movie's mawkish bookends and pedantic monologues removed, and you start to get a sense what Harvey has accomplished.

And like Ryan, I think it's wrong to classify Let England Shake as a protest album.

Harvey is far too edgy and cutting an artist to get sucked into false optimism.

War, in her eyes, is eternal, an inexorable part of the human condition. There is no end to the cycle.

All she can do in moral response is bear empathetic witness to those who have been trampled in war's wake.

Obviously, the risk to this approach of returning to the same heightened emotional territory again and again is diminishing returns, but Harvey fully counters this risk through a fantastic effort of musical variation.

Though wonderfully cohesive as a whole, no album this year better differentiates its individual songs.

Track after track stands alone with a clear, unique personality, a distinct, crisp structure, and the subtleties of design in this album are genuinely stunning.

Check out the way Harvey effortlessly shifts from bone-weary march to frightened chaos to hopeless funeral dirge as her soldiers realize they are all about to meet their fated end in All And Everyone, or the way a reggae sample is used to evoke both the otherworldly flavor of the ransacked Iraqi village and the lack of concern among the invading British and American troops in Written On The Forehead, or how the melodies of both George Of The Jungle and Summertime Blues are incorporated to suggest the trivial callousness with which England's past leaders have made decisions that went on to cost thousands of lives.

Truth be told, though I have liked a handful of other albums a bit more over the last six years, I cannot think of another album so confidently devoid of artistic misstep since Sleater-Kinney's The Woods dropped in 2005.

Though tremendous challenging, Let England Shake isn't just a great recording...it's rock 'n' roll as art of the highest order, and hands down the best album of 2011.

Cherry Picker's Best Bets: This Glorious Land, All And Everyone, Hanging In The Wire, Written On The Forehead.

Here's the video for the album's one foray into contemporary times, Written On The Forehead.

What are your thoughts on PJ Harvey's Let England Shake. Let readers know!
Posted by McQ at 10:01 AM