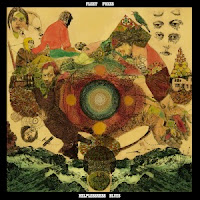 Through the years, some artists just seem to intrinsically go together.
Whether the result of historical influences, stylistic similarities, personality, regional identity, or a matched timing of definitive releases, it's hard for listeners to think of one artist without immediately conjuring thoughts of the other.  Nirvana/Pearl Jam, Yes/Emerson, Lake & Palmer, Led Zeppelin/Black Sabbath, Joni Mitchell/Carole King, Graham Parker/Elvis Costello, The Sex Pistols and The Clash.
But in recent years, outside of possibly England's Wild Beasts and Ohio's The Antlers, no two acts have felt more unintentionally tethered than Fleet Foxes and Bon Iver.

Both broke through in 2008 with heralded debuts that now stand as signature albums of the late Aught's "beard folk" movement, and now, both have returned to equal, if not heightened, critical acclaim in 2011.

As of this writing, with a good number of the year-end lists now out, it's clear both artists's sophomore efforts will land high in the consensus top tens compiled by http://www.acclaimedmusic.net/ and http://www.metacritic.com/, with Bon Iver's Bon Iver looking like a lock to take the number two spot and the Fleet Foxes's Helplessness Blues landing just a few spots behind.

But for me, it's these albums's flaws, not their strengths, that ultimately link the bands this time around.

No two albums were harder to get a qualitative grip on in 2011, and yet ironically...given how the acts target the same audience...it's for exactly opposite reasons.

Bon Iver's Bon Iver is an album of casually original, brilliantly intuitive material, diminished by an artist taking on technical duties he is in no way ready to handle.

Helplessness Blues is an album of aggressively ambitious, classically anchored but ultimately workmanlike material, elevated to near-greatness by one of the most astonishing production and arrangement efforts of recent memory.

"So now, I am older / Than my mother and father / When they had their daughter / Now what does that say about me? / Oh how could I dream of / Such a selfless and true love / Could I wash my hands of / Just looking out for me?"

Right from the opening verses of first track Montezuma, it's clear we're in for a different type of album from the Fleet Foxes this time around.

Where the Fleet Foxes self-titled debut was full of mystery, fantasy, and a rustic sense of place...Helplessness Blues is an intensely personal, confessional album, ready to plumb the deepest depths of band leader and principal songwriter Robin Pecknold's soul and tackle life's biggest questions head on.

And front and center seems to be a preternaturally insightful young man who realizes just how much a continued pursuit of his music will cost him.

Playwright August Wilson put it best years ago with his simple, matter-of-fact declaration on 60 Minutes that "Art comes first," that for an artist of genuine intent to ever think they will be able to place the needs of family, friends, or community ahead of their craft is sheer folly.  Art demands total selfishness.  To give higher priority to anything or anyone else is to merely guarantee failure on both fronts, and the thought of continuing down this road that will deny him so many of life's simple, enriching pleasures has Pecknold...the product of a happy family, still in his early twenties, and still young enough to jump ship...in existential agony.

Needless to say, the lyrics are one of Helplessness Blues's most captivating aspects, though by the end, so much gut-wrenching, soul-searching vulnerability does grow wearying.  By the time Pecknold starts tweely fantasizing about "Apples in the summer / all gold and sweet" on tenth track The Shrine/An Argument, I find myself about ready to hurl.

But then there's Phil Ek's production.

If there's a better produced album this year, I haven't heard it.

Put any of this album's tracks (except for Battery Kinzie) side by side in a mix with music from any other release this year and it is shocking how much more the songs here pop.  Other producers are going to leave the industry with their tail between their legs because of this recording.

And for the most part, the dense, dated Pet Sounds feel of the debut, also produced by Eks, is gone, replaced with an airier, instrumentally adventurous feel that recalls warmer 60s folk-rock classics like the first two Traffic releases, quieter numbers from Jefferson Airplane's Volunteers like Turn My Life Down, and the Pete Townsend produced self-titled debut for Thunderclap Newman. When the debut's Pet Sounds feel does return, as on weakest track Battery Kinzie, and too a lesser degree on closer Grown Ocean, it feels a touch out of place, getting in the way of the album's more direct, confessional feel.

Well, not just yet.

Unfortunately, Helplessness Blues does have a serious weakness, and that's the core architecture of the songs themselves.  The effort, craft, and passion put into this album are amazing...but genuine musical inspiration (again the exact opposite of Bon Iver's Bon Iver) is in relatively short supply.

Pecknold is on record as having been devastated by the greatness of Grizzly Bear's Veckatimest, and it's clear, given all the sudden tempo changes and surprising esoteric touches, that he views this album as an attempt to match Veckatimest.

But whereas most of Veckatimest's oddball flourishes had an undeniable sense of rightness to them, many of those flourishes here feel forced, workmanlike, and that goes double for many of the melodies, whose flaws are for the most part masked by the band's unreal harmonizing, but when you get down to it, sometimes feel downright pedestrian.

Worse, the biggest take away I sense from the Veckatimest template seems to be Grizzly Bear's tendency for momentum killing turns.

Take the title track, easily one of the year's best songs, but just like Veckatimest's Northern Lights opened as the best folk-rock song of its year but then chose to abandon that definitive groove for a new, ambitious but far less compelling direction, Helplessness Blues does precisely the same here in its final minute.

Still, with a band this talented, this ambitious, and production this good, on those rare instances when the muse truly strikes...as it does in the opening three minutes of the title track, Bedouin Dress, the choral intro to The Plains / Bitter Dancer, the surging charge of closer Grown Ocean, and the charming, blatant theivery of Dylan's 4th Time Around called Lorelai...the results are fantastic, and the craft and production generates such an elevating consistency that even though I consider The Fleet Foxes Helplessness Blues a far less inspired effort than their debut, it stands nonetheless as a better overall record.

So it appears to me, whether Pecknold realizes it or not, that he's already made his choice.

What are your thoughts on Fleet Foxes Helplessness Blues? Let readers know!
Posted by McQ at 6:17 AM