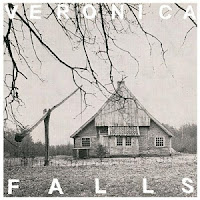 Scottish quartet Veronica Falls's full length debut is yet another example of post 20th century musicians doing what they do best - taking a variety of sounds and influences from rock's first fifty years, and then amalgamating them into a remarkably cleared eyed, fully formed stylistic synthesis that feels instantly familiar but is nonetheless, in its own subtle way, something entirely new.
Here the emphasis is on a highly propulsive 60s garage sound, which is then muted with a dash of 90s atonality; goth-slanting lyrics on love and death; hook-ridden, contemporary feeling female dream-pop vocals (think A Sunny Day In Glasgow), rich folk rock-flavored male backing vocals, and indulgent levels of late-era Velvet Underground / Galaxy 500 Ostrich guitar.

Despite the number of influences being blended, it all comes together effortlessly...producing a clean, straightforward, simple sound that while feeling of a piece with much of the surf punk we've all heard recently, is graciously delivered with none of that no-fi nonsense that's been diminishing album after album over the last few years.

Otherwise, there's not much else to say.

Though it contains no A+ track, Veronica Falls is a very solid evocation of one specifically constructed sound.

Give a song or two a listen.

I can guarantee if you like one, you'll probably end up liking them all.

12. Come On Over - 8
Intangibles - Average.
What are your thoughts on the full length debut for Veronica Falls. Let readers know.
Posted by McQ at 8:25 AM