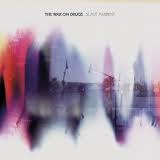 The War On Drugs is a rotating Pennsylvania outfit fronted by unabashed Dylan enthusiast Adam Granduciel.  Slave Ambient is the band's third full length LP, but at this moment, The War On Drugs are probably best known as the group that spawned 2011 indie-folk breakout artist Kurt Vile.

Vile officially left the band in 2008, but given the similarities between his and Granduciel's vocal delivery...not to mention how Vile performs on multiple songs on Slave Ambient, and how Granduciel and other current The War On Drugs members serve as the primary backing band on Vile's debut Smoke Ring For My Halo...it's easy to see the two 2011 albums as complementary releases exploring two different manifestations of the same shared musical sensibility.

But where Halo's primarily acoustic Dylanisms seem best suited to lazy, back porch hangs with friends on a hot summer's night, Slave Ambient's denser, far more propulsive songs scream to be heard on the open road.

In truth, Slave Ambient is so the quintessential road album...so efficient at conjuring that easy, hazy, "half present in the moment/half lost in dreamland" mental state of driving on the open freeway...that it kills me that I've already burned the metaphor to describe other albums on this website.

So I'm just going to have to repeat myself.

Because as far as perfect recent road albums go, Slave Ambient trumps them all.

Aside from the relentless lyrical references to "ramblin'", "moving on", etc., most of this success stems from the band's multi-layered, hard-to-pigeonhole sound, which feels like it's trying to evoke 90s shoegaze, 80s new wave, and 70s classic rock all in one fell swoop, and succeeds in this recombinatory endeavor to a surprising extent.  Listening to this record, I hear faint references to classic rock artists like Tom Petty, Mott The Hoople (especially as on their self-titled, Sonny Bono channeling debut), and Dylan wrestling side-by-side with textures born of My Bloody Valentine, U2, and height of his 80s MTV popularity Bruce Springsteen.

And yet, while repeatedly recalling all of these artists, the album manages to strike an agreeable tone that feels uniquely and consistently its own.

If there's a criticism to be made of Slave Ambient, and there aren't many, it's that the songs often feel less significant than the sound...and in this way, the album does remind me some of my second favorite release of 2011, Destroyer's Kaputt, another album where the moment to moment interplay of instruments off one another had a far greater impact than the song structures in full.

But Slave Ambient is also a tremendous grower, and over repeated listens certain songs do take strong hold, especially the fine opener Best Night, the jaunty, "could have been on Born In The USA" Baby Missiles, the epic, U2ish Come To The City, and the wonderfully relaxed yet urgent Brothers.

So while overall song quality prevents me from giving Slave Ambient a straight-up strong recommend, this is as enthusiastic a solid recommend as I can muster...an album I can't bring myself to call great, but love all the same.

If you've got a road trip of any length coming up, you'd be crazy not to pop Slave Ambient into your car stereo and give it a whirl as the mile markers drift by.

Here's the official video for the Born In The USA worthy Baby Missiles.