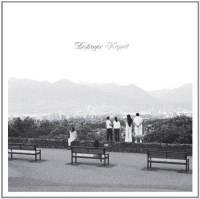 When it comes to my feelings on Destroyer's Kaputt, there's only one thing that needs to be said.

I love this album!

I love near everything about it.

I love how Dan Bejar has taken the kitschiest R&B and new wave textures of the early 80s and morphed them not only into something constantly enticing, but genuinely cool.

I love Kaputt's confident off-hand lyrical flow and unbelievable sound, the way the end of every talk/sung line feels like a launching pad for all manner of magical flourishes, be they driven by shimmering keys, throbbing fretless bass, piercing guitars, Sibel Thrasher's killer backing vocals, or the album's signature electric brass.

And I love the album's unrelenting, after-hours romantic warmth.

That's not to say Kaputt is perfect.  It's not.

Closer Bay Of Pigs (Detail), an older Destroyer track that has already been released in other guises over the last few years, feels out of place with the rest of the material, and truth be told, the album does get by more on sound, flow, and vibe than it does on the straight-up strength of its songs.

But these are quibbles.  Kaputt is all about the intangilbes, and at the end of the day, a more inviting, relaxing 2011 release does not exist.

A lot of acts are presently experimenting with these same nostalgic 80s tones...from Gayngs, Bon Iver and Iron & Wine on the more conventional side, to James Blake, How To Dress Well and Weeknd on the more experimental, but none of these artists have come close to capturing lightning in a bottle the way Dan Bejar has here.

Destined to become one of the top make out albums of the next decade, Kaputt is Roxy Music's Avalon

, Savage Night At The Opera

Here's the very amusing video for the title track.

What are your thoughts on Destoyer's Kaputt?  Let readers know.
Posted by McQ at 11:28 PM