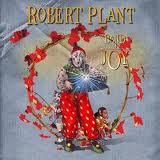 An engaging and logical follow-up to Plant and Alison Krauss' hit 2007 album Raising Sand, Band Of Joy is a return to roots both musical and personal.

Musically, this album of exclusively covers is a natural continuation of the country-tinged Americana Plant so effectively laid-out on Raising Sand.

But in reclaiming the name Band Of Joy, Plant is also drawing links to his own past, to his mid-60s, pre-Led Zeppelin days, to the British blues-rock outfit he helmed with cohort John Bonham before Jimmy Page became a principal driver in their musical careers.

The result is an album that pulls strongly from both prior influences.  Raising Sand participant  Buddy Miller doubles as guitarist and producer here, taking over production duties from T-Bone Burnett, and the glorious Patty Griffin steps into the Alison Krauss role, but otherwise, the song selection feels similarly structured.

What has changed, however, is the attitude and tone.

Band Of Joy is grittier, moodier, with a much more naturalistic, lived-in feel to its nostalgic vibe. In fact, I don't think I'm going out on much of a limb here to say the real star of Band Of Joy is neither Plant or Griffin, but Miller, whose swampy guitar tones and production dominate the album.

Unlike on Raising Sand, where Plant and Krauss alternated leads, Plant doesn't share any lead work this time out; Patty serves here solely as a harmonist.  But one can hope - especially given that Plant and Griffin have since eloped - that Patty will be provided a greater opportunity to shine on the second go round. After all, Plant may be one of the greatest Rock 'n' Roll singers of all time, but he's now only the second best singer in his immediate family.

But back to the songs themselves.

There are a number of standouts here, and part of the fun is how different Plant and Miller's takes are from the originals, while still preserving a clear sense of the originals.

Among my personal favorites are the Beatle-esque rendition of You Can't Buy My Love, the dirty, bluesy flow to Even This Shall Pass Away, and a superlative cover of Los Lobos' Angel Dance, but irony of ironies, two of the album's best tracks are also its two most disappointing.

Miller does a marvelous job recasting those originally soaring numbers as haunting, swampy brooders, and it's on these tracks that his killer guitar work really shines, but for some reason, Plant and Griffin's vocals, which would seem perfect for these songs, don't come close to matching the spine-tingling harmonies exhibited by Alan Sparhawk and Mimi Parker in the originals.  Silver Rider's massive wordless chorus, in particular, seems to have been unnecessarily simplified here.

But those quibbles aside, I actually found Band Of Joy to be straight up a better album than Raising Sand.

I doubt fans of Plant's hard-rocking Led Zeppelin days will be wowed, but enthusiasts of Plant's more recent country-oriented work are well-advised to check this out.