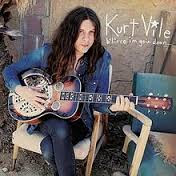 As its contradictory cover photo and inner sleeve artwork imply, Kurt Vile's I B'lieve I'm Goin Down is an album with two primary goals that would seem, on initial impression, to be at cross-purposes; create a set of songs with the low-key, homespun, hanging-on-the-front-porch intimacy of 2011's primarily acoustic Smoke Ring For My Halo, but also give those songs the nuanced, highly processed studio work over of 2013's heavier, more psychedelic Wakin' On A Pretty Daze.

And on the surface, Vile appears to succeed.

This is unquestionably a collection of laid-back songs that sounds, on first listen, like you hearing it seated in that open chair next to Kurt on the cover, but which upon closer examination couldn't even exist without that plethora of distortion pedals and gear depicted in the album's inner sleeve artwork.

Unfortunately, while Vile does attain his overall stylistic goals, this is a record that only triumphs in the second arena.

I cannot say enough good things about the quality of the production on this album and the fascinating, subtle, wonky touches, but it is all in the service of the of some of the laziest, most lyrically insipid songs Vile (or frankly anyone I've listened to regularly in recent memory) has written.

While the album has no goofy laughter, it's not much of a stretch to say that otherwise many of I B'lieve I'm Goin Down's lyrical passages hit with the same stoned-out "Hey Bro," intellectual anti-wallop of a Beavis and Butthead conversation.

There are a few exceptions. Lost My Head There is a forthright, genuine attempt by Vile to deal with some personal anger-management demons, and best song Pretty Pimpin, while intentionally silly, just works on hitting a relatable moment of positive self-evaluation we've all experienced a few times in our life in a charming, offhand way.

But aside from that, what develops over most of B'lieve I'm Goin Down's twelve song run is one of the most schizophrenic listening experiences of 2015, dragged down by the unrelenting low energy of the music and the barely trying lyrics, but constantly elevated by the exceptional studio work.  If I were judging this album purely on song quality, it would end up second-to-last in our rankings, but because of that production work, I've moved the album up several notches in our year-end assessment.

So while I would still direct listeners checking out Vile for the first time to the much better Smoke Ring and/or Wakin', from Lost My Head There's killer coda, to Stand Inside's awesome electric guitar and piano accents, from Kidding Around's ethereal backing vocals to Wild Imagination's gorgeous closing vibes - I B'lieve I'm Goin Down is an album well worth hearing for the production and arrangement touches alone, no matter how limited the songs.

Here are the official videos for Pretty Pimpin' and Life Like This, and a live in-studio performance of one of the album's other better tracks Dust Bunnies.