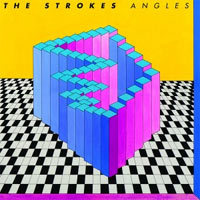 What an odd little album Angles is!

One would think, given that it's now been five years since the release of their disappointing third album, 06's First Impressions Of Earth

, a hiatus peppered by several band member solo releases and persistent breakup rumors, that The Strokes would be a determined to reclaim the old magic of 01's decade-defining debut Is This It?


But that clearly isn't the case.

Instead, other than throwing their fans a couple of classic Strokes-styled bones with the awesome Under Cover Of Darkness and the decidedly average Taken For A Fool, the band has embarked on a musical and experimental odyssey (cue the Spinal Tap joke now), exploring a wide range of genres and styles previously not associated with their music.

In a crisp thirty-five minutes you will hear elements of reggae (Machu Picchu), spare Velvet Underground-styled folk (Call Me Back), seedy Liars-flavored art-rock (You're So Right), Steely Dan-ish classic-rock (Gratisfaction), disco (Games), Muse-like prog-rock pomp (Metabolism), dream pop (the opening to Two Kinds Of Happiness), and mid-60s Kinksian quaintness (Life Is Simple In the Moonlight). In a lot of ways, it reminds me of Franz Ferdinand's sophomore effort You Could Have It So Much Better, which similarly, after offering established fans a couple of crowd pleasers, seemed to have only one ostensible goal...to not sound like anything the band had done before.

It's a bold move for a group that's been out of circulation for such a long period of time, and in the opening moments, it really works.  Machu Picchu and Under Cover Of Darkness both rank with the best work the band has ever done, and Two Kinds Of Happiness, though oddly fragmentary, offers a charging, riff-and-drums-powered chorus that stands as the album's peak highlight.

But then the genre-shifting really kicks in, and sadly, it quickly becomes apparent that stylistic experimentalism does not suit this band well.  They are who they are, and good or bad, in future efforts, they are going to have to come to grips with it.

Still, while I'd classify most of the songs on the album's back two-thirds as mild failures, they are interesting failures, most with captivating moments of inspiration, which lends the whole affair an air of intrigue even as one acknowledges most of the material isn't that strong.

So based upon that, and the album's excellent 1-2-3 open, I'm giving Angles a mild recommend.

Much of it's musical stretching doesn't work, but it's compelling to hear the band try.
Status: Mild Recommend.

, Under Cover Of Darkness

Here's the official video for Under Cover Of Darkness.


What are your thoughts on The Strokes Angles.  Let readers know!
Posted by McQ at 9:27 AM