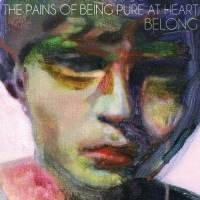 The omnipresent Jesus And The Mary Chain drones of their popular 2009 self-titled debut are gone, replaced by a meaty slathering of reverb-drenched 90s guitars and M83ish synth washes, but otherwise, it's business as usual on The Pains Of Being Pure At Heart's sophomore effort Belong...the same dreamy, highly melodic, chimey pop anchoring the same earnest lyrical focus on the heightened joys and heartbreaks of young romantic love.
Sonically, the album is a definite step up.
The production is excellent, and those Smashing Pumpkins-flavored guitars provide added punch without in anyway compromising the band's relatively gentle nature.
But overall, the songs, and especially the melodies, aren't as up to snuff.
I'm not talking about a serious drop-off.  Belong still possesses a number of solid to very good tunes, but nothing that cuts through the clutter quite like The Contender, Young Adult Friction, or The Tenure Itch did on their debut.
For this set, the high points include Heaven's Gonna Happen Now and The Body, both delicious little pop numbers, and best track Heart In Your Heartbreak, which unleashes a killer melody in the service of a slightly cheesy, but clever and effective, lyrical gimmick.
But in the end, a few too many disposable moments reduce Belong to just a likable, easy-on-the-ears listen that will satisfy fans of the band and shoegaze/dream pop genre, but doesn't seem to do enough to pull many new listeners into the fold.
Status: Mild Recommend.
Cherry Picker's Best Bets: Heaven's Gonna Happen Now

, Heart In Your Heartbreak

.
Here's the official video for The Body.

What are your thoughts on The Pains Of Being Pure At Heart's Belong?  Let reader's know!
Posted by McQ at 7:26 AM