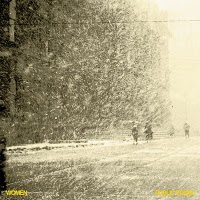 Jagged, degraded, and remarkably unpredictable, Women's second LP Public Strain is an album that positively luxuriates in its own special brand of beautiful ugliness.
In many respects, with its buried, unintelligible, tuneless vocals, sinister drones, rock-bottom base, shrill arpeggio guitar runs, aimless drums, and the occasional burst of sunny 60's harmony, it's a combination of sounds that just shouldn't work.

But it does, and for those lucky few strong enough to soldier through multiple listens, a world of indescribable intrigue awaits.
In fact, one of Public Strain's most endearing qualities is just how difficult an album it is to pin down.

Pre-Daydream Nation Sonic Youth...early Velvet Underground made double primitive...garage gone bad...fussed over no-fi...all of these descriptions have been bandied about in the media, and all point in the right direction, but none quite capture the elusive essence of this Calgary act's effort.

If I were to make my own futile attempt, I'd liken listening to Public Strain to hearing a back-of-the-room cassette recording of the cellar-dwelling house band of some grimy, bohemian, SoHo dive circa 1966.

And much of Public Strain does sound genuinely awful.

But buried amid all those ugly, intentionally amateurish components is the band's shockingly perceptive understanding of musical tension.

Just when you think Public Strain will relax, it explodes into a knotty, crazed, intricate burst worthy of Captain Beefheart.

Just when you think it's going to hit you with something dark and menacing, it suddenly builds to a climactic accessible catharsis.

And it's this intuitive, constant thwarting of the listener's expectation, which is then rewarded with something even more interesting than what was anticipated, that is the primary source of this little album's hypnotic power.

So if you are a brave-hearted listener, willing to go to dark and unusual places, trust me here.

However off-putting it may seem at first, Public Strain is one of 2010's most rewarding listens.

Here's Heat Distraction, my personal favorite from the album.

What are your thoughts on Women's Public Strain?  Let reader's know!
Posted by McQ at 2:06 PM