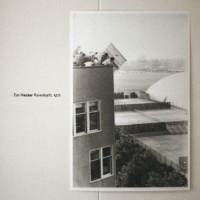 While trying to read meaning into the untethered abstractions of an ambient recording is usually a shaky proposition, I think it's safe to say that in the specific case of Tim Hecker's throbbing, sometimes jarring, massive-sounding Ravedeath, 1972, the assault on traditional music by modern digital technology was very much on his mind.
From the album's dated cover photo of M.I.T. engineers about to release a piano from a dormitory rooftop in the school's annual "Piano Drop" ritual, to the violent titles (Ravedeath 1972, Hatred Of Music, No Drums, Analog Paralysis, 1978, Studio Suicide, 1980), to the hypnotic blend of Hecker's aged, surging pipe organ (recorded in an abandoned Reykjavik, Iceland cathedral) doing seamless, chaotic battle with all manner of electronic elements, music is very much under attack on Ravedeath, 1972, and science/digitization/technology is the definite villain.
For fifty-three minutes, the record walks the knife's edge between melody and pure noise, artificial elements charging in to disrupt the mix every time a genuine pattern threatens to emerge.
It's very much of a piece, continually dissonant, hard to grasp, and often explosively loud for an ambient album, but despite this sonic consistency, a sense of movement does exist.
Through the first five tracks, the combat reigns supreme, but then, in the album's critical sixth track, Part I of the Hatred Of Music suite, a clear mood builds, and the music begins to suggest another famous work that was also obsessed with technology's assault on humanity, the closing moments of Vangelis's score for the film Blade Runner.
For those who remember the movie, it's almost impossible at this moment on the record not to envision Rutger Hauer's Roy Batty, in metaphoric synergy with Ravedeath, 1972's cover, holding Harrison Ford's Sam Deckard aloft over the dark, wet streets below.  And as with Batty, who in his final act chooses life over destruction, the album shifts direction at this point, the battles still continuing, but traditional melodic components bursting forth more and more, until in the final closing track, Part III of the In The Air suite, melody and traditional piano are near all that remains.
The conceptual message seems clear.  Music, no matter what left hooks technology throws its way, will always prevail.
It's definitely not an album for everyone, sonically having more in common with Lou Reed's Metal Machine Music than anything readers are used to hearing in a conventional sense, but I found Ravedeath, 1972 to be a fascinating conceptual listen, and believe many fans of ambient music will feel the same.
So if you're in a daring listening mood, this is one challenging record I would definitely give a try.
Status: Strong Recommend.
Cherry Picker's Best Bets: In The Fog Part II

, Hatred Of Music Part I

, In The Air Part III

.
Here's a music only rip of Ravedeath, 1972's centerpiece, Hatred Of Music Part I.

What are your thoughts on Tim Hecker's Ravedeath, 1972? Let readers know?
Posted by McQ at 7:47 AM