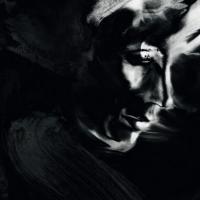 Oh, that the album that followed were more like Honey.
Dark, sinister, and incredibly atmospheric, armed with a phenomenal, stereo-panning vocal build, it's as compelling an opening track as 2010 produced, and suggests a million music possibilities to come.
And then, from that point on, Black City delivers just one.

Locking in on slow, moody synth grooves reminiscent of Bowie's late 70s and early 80s work...tracks like Ashes To Ashes

and Cat People (Putting Out The Fire)

...with maybe a touch of that Liars' backing vocal feel from Drum's Not Dead

,  Black City turns into a dance album with a very distinct sense of place.

Every moment feels like a song you'd hear at one of those cliche uber-exclusive clubs depicted in James Bond movies...you know, those urban clubs that only admit the world elite, where every gorgeous patron wears black, and where heinous criminal deeds are perpetrated in every back room.

And as far as the album is concerned, this is a good thing.  Black City's sense of place and mood is its greatest strength.

What kills Black City is its woeful lack of variety.

Dear seems to become far too content far too early with what he's created, because basically, a more numbingly repetitive 2010 release does not exist.

It's as if once he decided he was satisfied with the album's core sound, the creation of variations in that sound was not required.  This doesn't make the album bad, as most of the individual tracks are solid in their cool, decadent, Bowie-esque way, but the cumulative impact of the "same-i-ness" factor is just brutal by the album's back half.

Personally, I struggle to stay tuned in much past track four, and I think for some the boredom will set in even earlier.

For most listeners then, an MP3 cherry pick is probably the best approach.

Grab Honey for sure, and the longest and best dance number  Little People (Black City), and then the moody closer Gem.  Those are the album's three essentials.

After that, it all comes down to how many more variations on Little People you care to hear.

Here's the official video for Slowdance.