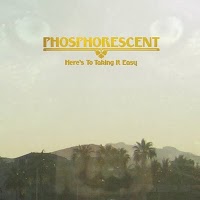 Instantly recalling the sound of early country rock classics like The Byrds' Sweetheart Of The Radio or Gram Parson's Grievous Angel, but adding in a contemporary lyrical spin, Phosphorescent's Here's To Taking It Easy is a relaxed, hugely agreeable album that fully lives up to its name.
And at the center of it all is idiosyncratic songwriter Matthew Houck.

Possessed of a droll wit and a voice that is a dead mix of Parson's warm tones and Roger McGuinn's otherworldly twange, Houck has been releasing records under the Phosphorescent moniker since 2003, but Here's To Taking It Easy is his first outing with a full band.

From the very onset, though, it becomes clear that musical chemistry will not be a problem.

The ramshackle It's Hard To Be Humble (When You're From Alabama) is a wonderful, fiesty opener, and things get even better with the drawling Nothing Was Stolen, a celebration of love's never ending awkwardness, which offers up sly self-deprecations like "Well apart from the things I touched / nothing got broke all that much."

From there the album touches on all manner of present day heartbreak, joy, and irritation, sustained throughout by its irresistable pedal steel churn and Houck's dry humor, which manage to turn even obvious throwaways like Hej, I'm Light and I Don't Care If There's Cursing into fully engaging numbers.

I do have a few issues.

The record could have been sequenced better, it burns through all of its best material by its midpoint, and some of the instrumental breaks underwhelm, the band seeming to lose confidence when untethered from its primary drivers, Houck's lyrics and voice.

But overall, if you've got any taste for good, old-fashioned country rock, Here's To Taking It Easy will prove near impossible not to like.

Cherry Picker's Best Bets: It's Hard To Be Humble (When You're From Alabama), Nothing Was Stolen (Love Me Foolishly), The Mermaid Parade, I Don't Care If There's Cursing.

Here's the official video for the album's rollicking opener It's Hard To Be Humble (When You're From Alabama).

What are your thoughts on Phosphorescent's Here's To Taking It Easy? Let reader's know.
Posted by McQ at 6:44 AM