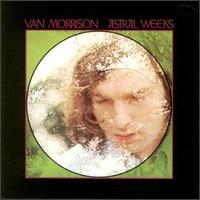 I don't know how else to say it - Van Morrison's Astral Weeks is the most timeless album in rock 'n' roll.

With the possible exceptions of Jimi Hendrix's Are You Experienced? or The Rolling Stones's Exile On Main Street, I don't think there's another album I've listened to more in my lifetime, and yet, no matter how many times my wife or I throw this record on, something we still do regularly, it never, ever feels dated or old.

Much of this comes from the album's unique design.

Generated entirely from acoustic instruments, and born mostly of Morrison's childhood rooting in Celtic folk and American jazz, there's no technological or stylistic bent to the music that links the album to any specific era in rock 'n' roll.  But it's the records introspective, deeply personal, at times even inscrutable feel...as if the whole album sprung forth fully formed straight from Morrison's subconscious (or his gut)...that is the main source of Astral Weeks's ageless power.

Which is a delicious irony, given the arbitrary manner in which the album was actually made.

Recorded in just two and a half sessions in September and October of 1968, with a supremely talented group of jazz musicians led by upright bassist Richard Davis and drummer Connie Kay, Morrison provided little to no instruction for his band.  Instead, he isolated himself in a separate booth with his acoustic guitar, telling the other musicians, most whom he had just met, to simply "play whatever you feel as long as you stay out of my way."

But out of that directionless freedom came pure magic.

Anchored by Davis's astonishing bass, the resulting sound was a stunning, ethereal flow of interweaving flourishes that, while often lighter than air, seemed a perfect accompaniment to Morrison as he exposed raw his mystic soul.

Lyrically, much of the material was very dark and should have been controversial...from Slim Slow Slider's meditation on death, to the sad Belfast transvestite character study Madame George, to the even more troubling Cyprus Avenue, which puts us right in the head of a conflicted potential pedophile as he sits in wait for a young school girl...but the music had such hypnotic pull, controversy never arose.

This was also the album that established Van as having no parallel when it comes to drawing out the ending to a song.

Most of Astral Weeks's longer songs peak quite early, often before the halfway point, then gradually diminish over several spellbinding minutes as Morrison recants phrases and sentences as if slowly slipping into a trance.  And we, the listeners, are pulled right into that state with him.

High on the short list of contemporary music's all-time great singers, it's an understatement to call Morrison's soulful, explosive vocals here a tour de force.  His visceral singing on Cyprus Avenue alone puts this album in elite company, and his performance on Astral Weeks's other seven tracks is every bit as strong.

One of the most gorgeous, singular, and mysterious albums ever put to vinyl, Astral Weeks an is absolute must own.

Here's a music-only video for one of my all-time favorite tracks, opener Astral Weeks.

What are your thoughts on Van Morrison's Astral Weeks.  Let readers know!
Posted by McQ at 8:34 AM