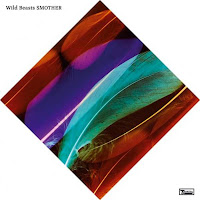 The cover to Wild Beasts's latest release, the thematically air-tight Smother, depicts a number of distinctly colored, transparent feathers flattened atop one another and clipped by a diamond border.

You can discern the outline and texture of each individual feather if you work hard enough to see through all the color blends and overlaps, but for the most part, the sense of any single element is lost in the couplings.

And so it is for the human protagonists and antagonists of Smother, an album wholly locked in on the suffocating nature of sexual desire.

On the surface, the album seems designed to viscerally convey that heart-stopping loss of breath one feels when in the initial throes of passion.  The voices play almost whisper soft, the music is achingly restrained, but a wave of intense emotion always seems on the verge of surging forth.

But on a deeper level, Smother seems to be after something more profound...the inevitable loss of self that occurs with any romantic pairing.

The Smashing Pumpkins's Billy Corgan put it far less subtlety twenty years ago when he bellowed "Love is suicide!", but Smother is similarly obsessed with just how much will we savagely take or consciously sacrifice in the service of carnal urges and love.  Deftly rendered lyrical images of predatory domination (Lion's Share, Plaything) and willful sublimation (Bed Of Nails, Invisible, Reach A Bit Further) abound...friends and family are jettisoned, cherished possessions and pastimes are casually tossed aside, elemental life goals are abandoned...all to sate uncontrollable flames of lust that threaten to burn away all we were before.

Ironically, despite the strong, mature manner in which these themes are explored, I suspect it will be the musicianship that brings most listeners into the fold.

For three albums now, Wild Beasts have been honing in and refining one very specific, compelling sound, a sound that seems a perfect fit for the band's personnel, and that seems destined to sustain them for many albums to come.

Two Dancers, with its violent, almost Clockwork Orange-ish tales of hedonistic English hooligan's run amok, allowed itself a more dynamic, flamboyant design.  The songs had a greater sense of build, of unpredictability, of catharsis.

But with Smother, the emphasis is solely on the burn, not release, and as a result, much like on Arcade Fire's The Suburbs, the peaks and valleys are intentionally flattened until the album's very end.

In the Suburbs, that moment of release came with The Suburbs Part Two (Mountains Beyond Mountains), with the album's protagonist finally breaking free of her spiritual confines and finding other similarly minded souls.  Here, it comes (literally and figuratively) with final track End Comes Too Soon, but in a brilliant follow through on theme, the song skips the moment of sexual release, instead jumping in post-coital as the yearnings, and then the very relationship, start to fade.  Then, after a minute long drift into near nothingness, the song reemerges exultantly, implying the phoenix-like rebirth of self that comes at the end of a relationship, even as one continues to long for the overwhelming emotional connection that has been lost.

It is just one of the many sophisticated highlights on this understated, immaculately produced album, one of the smartest...and best...that 2011 has to offer.

Here's the official video for Bed Of Nails.  Be sure to check out the killer vocal bridge at the 2:03 mark!


What are your thoughts on Wild Beasts's Smother? Let readers know!
Posted by McQ at 6:24 AM