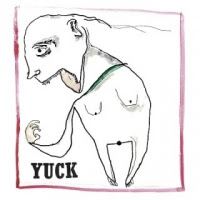 Here we go, folks, head first into the inevitable 90s revival that's sure to dominate much of the next ten years.
And first out of the gate, with their very promising self-titled debut, is the ridiculously young London-based band Yuck.
Composed of three lads and two ladies, most whom have yet to reach legal drinking age in the States, their album has received widely disparate reviews. On the negative side, critics bemoan the album's derivative recreation of just about every 90s fuzz-rock trope.
On the positive side, the side I am decidedly on, is praise for just how perfectly the band pulls it off.

Give this album a spin and you'll hear the blatant influence of 90s acts such as Dinosaur Jr., My Bloody Valentine, Sonic Youth, Dinosaur Jr., Belle & Sebastian, Smashing Pumpkins, Dinosaur Jr., Pavement, and Jesus and the Mary Chain...oh, and did I mention Dinosaur Jr...all rendered with loving accuracy.

But further countering the "derivative" argument, I've always felt there's a flip side, and that's the impact of stylistic crystallization that can only come in hindsight.  Let's not forget, one of the most derivative artists in all of history was William Shakespeare, and he did okay.

Obviously, I'm not elevating Yuck to Shakespearean status, at least not yet, but just as many of the Aught's 80s focused bands...acts like Franz Ferdinand, LCD Soundsystem, Robyn, Cut//Copy, Wolf Parade, Clap Your Hands Say Yeah, Wild Beasts, and The National...delivered an album or albums that were just as good if not better than those of their 80s influences, Yuck comes at this project having spent their whole lives absorbing and mastering the fine points of the style before laying down their first note.

And from the opening moments of first track Get Away, it's clear this band has the genre down cold.

Excellent, efficient fuzz rockers bleed into moody, shoegazey ballads then bleed back into fuzz rockers with such clarity of purpose that the album almost plays as a greatest hits compilation for the entire decade.  The energy and quality drops of some as the band explores slower, sludgier tempos on the album's back half, but its first six tracks play as strong as the opening half of any release in 2011.

Personal favorites include the instantly iconic The Wall (sure to be a festival crowd pleaser for years to come), the downright nasty Sonic Youth distillation Operation, and the gorgeous Suicide Policeman, which starts off unassuming and then slays with some plaintive Belle & Sebastian-flavored brass.

Otherwise, there's not much to say.

If the forces of mass culture insist we spend the next ten years revisiting the sounds of the 90s, I can't imagine getting off to a more satisfying start than with Yuck.

Here's the official video for Get Away.

What are your thoughts on Yuck?  Let readers know!
Posted by McQ at 7:13 AM