Second Half Comeback: Black Joe Lewis And The Honeybears At The Los Angeles Echoplex November 11, 2011 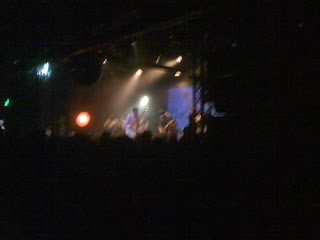 A big fan of their excellent second album, 2011's Scandalous, and having been wowed by their knock-out Coachella set this previous April, I was more than excited for the opportunity of see what Austin, Texas blues/funk outfit Black Joe Lewis And The Honeybears could do with a headlining slot.

Heading out with my wife and several neighborhood friends as part of my birthday celebration, that enthusiasm turned to wary concern the moment I entered the Echoplex for my very first time.

Simply put, the basement-level Echoplex is a dump, one of those intentionally gritty, slightly punky dive bars that just happens to have a stage, much in the vein of Chicago's Metro or Empty Bottle, but with far worse sight lines as large weight-bearing columns start to reach for the ceiling just twenty feet back from the stage.

And unfortunately, the acoustics would prove even worse.

Taking the stage at 11:15, the Honeybears soon discovered the room offered few sweet spots where a band can effectively deliver their sound.

Up close, the mix was throbbing and muddled, but move just fifty feet back and the venue's low ceiling all but erased Black Joe's vocals and the band's marvelous brass section.

All their biggest booty-shakers and jams were held in reserve, leaving the first forty minutes filled with still engaging and rocking but comparatively weaker numbers such as I'm Gonna Leave You, Black Snake, Jesus Took My Hand, and their cover version of Robert Johnson's Stop Breaking Down. Try as the band might, given all the acoustic issues, they just couldn't get things to gel, something even Joe noted when he asked about twenty minutes in "You guys having a good time tonight? Cause I don't see none of you moving at all."

Here's the one fan captured video I've found from the show, which was taken in this problematic earlier portion of the set.

But then, at the halfway point, things suddenly kicked into gear.

After one or two more numbers, the band left the stage, then came back out for a hysterical, lengthy cover of the Rivington's The Birds The Word.  It proved to be a fine, playful, satisfying end, finally displaying this band at its best on a night when getting to that point seemed very much in doubt.

Still, sound problems aside, the longer set did expose some of the band's limitations that their shorter Coachella set did not.

First, Joe has a ways to go as a front man.

In front of an eager crowd like one gets at Coachella, all one really needs to do is play one's best, but here, in a shitty venue with all those audio troubles, combined with the standard-fare only half-engaged LA crowd, more banter and interaction would have gone a long ways towards pulling the audience into the show.

Also, the longer show length suggested the band may not yet having enough top quality material to sustain much more than a forty-minute set, though as an act they certainly show the potential of generating that additional material within their next couple of releases, and more balanced sequencing on this night would have surely helped.

But the biggest issue facing the band is one of identity.

The name is Black Joe Lewis And The Honeybears, but to me, this band works best as a pure ensemble.

Joe isn't a classic front and center soul singer like James Brown, whom he's often compared to, or contemporary soul ass-kickers of note like Sharon Jones.  While more crowd interaction would have been nice, musically on this night he was trying to grab too much of the spotlight...taking several guitar leads on the night when a superior guitarist was standing just feet to his right.  This band works best when the emphasis is on their interplay, rather than its talented but not tremendously charismatic frontman.  Hopefully they'll get these kinks worked out and find the right balance, because overall, this band is still full of promise...when they're hitting their peak, there are few rock/funk acts better.

Of the night's opening acts, only caught a few minutes of punkers Dikes Of Holland, can't say they did much for me.

Rolling Stone Magazine cover photo contest winners Sheepdogs took the middle slot.  At first their earnest recreations of early 70s classic and Southern-Fried rock felt corny and derivative, but the hirsute band definitely has instrumental and vocal chops, and by the end of their set, particularly on a fantastic Santana-ish second to last number, my friends and I were fast becoming fans.
Posted by McQ at 10:33 AM