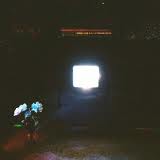 One of the more celebrated electronic releases of 2010, this ambitious effort from Cleveland noise /art-rock stalwarts Emeralds is notable for its meticulous recreation of the classic sounds and textures of early avant-garde electro-pop and ambient music, particularly those mid-to-late 70s works of pioneering electronic artists like Vangelis, Tangerine Dream, Robert Fripp, and Brian Eno.

Truth be told, half these songs would almost feel right at home on Eno's  masterpiece Another Green World, and those that don't could flow effortlessly in a mix with tracks from other Fripp/Eno efforts like No Pussyfooting, 801 Live, Exposure, Music For Airports and Music For Films.

For me though, the mere spot-on recreation of these sounds was not enough.

Though the music is expertly done, sometimes with interesting twists, Emeralds fail to recognize the primary differentiator of Eno's genius: For all of Eno's conceptual innovation, it was his ability to marry his abstractions with a retained sense of primal, human emotion that set him apart.

Eno's efforts from this era weren't just groundbreaking...they could also be profoundly moving.

Here, aside from one beautiful track (Goes By), Emeralds fail to deliver on the emotional half of that equation, leading to a record that comes off - to borrow a phrase from the presidential debate parlance of the moment - as quite wonky: occasionally fascinating reworkings of forgotten sonic motifs, conveying little to no heart.

There are tracks that impress.  The aforementioned Goes By, the fine, building opener Candy Shoppe, the explosive title track (which reminded me some of Tim Hecker's work on Ravedeath, 1972), and the shifting, over-the top but at times glorious Genetic are all well worth a listen.

But the rest of the material, while still decent, floats by in a bit of a bloopy, hard-to-connect-with, undifferentiated haze that is best left to fervent fans of the band, genre and era.