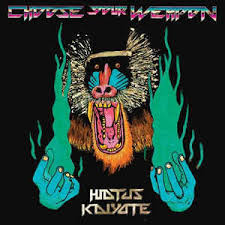 There are two albums I purchased in 2015 that did not end up represented in our year-end mix collection.  The other, Girl Band's Holding Hands With Jamie, I feel bad about omitting.

This album I do not.

The one thing it is not is my cup of tea.

In fairness to this specific effort, neo-soul as a whole is really not my cup of tea. I personally struggle to get much satisfaction from even the best works of absolute masters in the genre like D'Angelo and Erykah Badu, let alone the genre's many lesser acts, but still, for me, this album is very tough going, often straight-up irritating. I'm giving it a mild recommend as opposed to a not recommend for two reasons. One, there are brief, inspired stretches here and there that show how much potential the band has when the vocals calm down a touch, and two, because it has received such a vastly positive critical reception and has so many fans around the globe, I don't want to completely turn new listeners away before they take a moment to hear it on their own.

But for me, Choose Your Weapon is a very problematic record, and ninety percent of the album's problems begin and end with band leader/guitarist/singer Naomi "Nia Palm" Saalfield's vocals.

Gymanstic, scale-running, diva-ish soul singing has always been atop my list of least favorite vocal styles ever, and on Choose Your Weapon Saalfield pushes that style to almost cartoonish levels.

Why limit any syllable to a single note when a run of five to twenty-seven will do?

Making matters worse, unlike most pop and soul music, where songs are built up structurally from a rhythm and core chord progression foundation, the music here feels like it has all been built top down with Saalfield's highly non-linear vocals leading the way...leading to an album possessed of an endless series of dynamic starts, stops, grace notes and flourishes in response to the shifts in Saalfield's vocals, but all at the expense of the album ever building up an ounce of musical momentum over it's way-too-long, seventy-minute run time.

Lyrically, the album isn't much better, for the most part silly, flowery, pagan-y, mystical dreck, but the lyrics really aren't the primary issue here as most are rendered unintelligible by Saalfield's singing style.

On the positive side, this is, without question (and I'm including Saalfield's guitar work here), an extremely talented band on a technical level, incredibly tight, and able to shift direction in the blink of an eye.  So there's hope going forward.

But to paraphrase what the great science fiction writer Gene Wolfe once told me in an evening writing class years ago with tough but well-intended honesty - the band's style needs a lot of work.