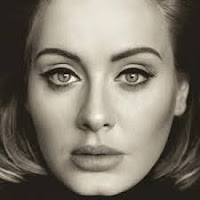 The mega platinum follow up to her megaplatinum break-out album 21, Adele's 25 can be neatly summarize as more of the same as 21, but less - much, much less.

On near every level - lyrical themes, vocal styling, orchestration, song sequencing and pacing - 25 seems determined to capture lightning in a bottle a second time out, but whereas 21 was powered by the sincerity of the genuine heartbrake Adele was going through during that album's creation, 25 comes off as a calculated and insincere attempt to reproduce that moment, and the material is all the worse for it.

That's not to say that there aren't some good songs on this album, or that the production isn't first rate, or that Adele is in poor voice, but anyone who hasn't already heard 25 should knowgoing in that the thrills are far fewer this time around.

Opener Hello was a huge hit striving for the same bigness of Rolling In The Deep, but it just comes off as bombastic and overwrought to me, and several of the ballads, especially When We Were Young, Love In The Dark, and All I Ask, play treacly and bland.

Better are I Miss You, which also plays to Adele's hugeness of voice but has much more emotional urgency to it than Hello, Send My Love (To Your New Lover), which successfully hits the quirkier, bouncier second track vibe occupied by Rumour Has It on 21, the 60s flavored, Spanish guitar accented torch song Million Years Ago, and my favorite track, the rousing closer Sweetest Devotion.

But again, however professional, well sung, or well-produced 25 may be,  the air of crass studio calculation hangs over every note.  Fans of monster-voiced, female British belters would be far better served checking out Florence And The Machine's not great but more stylistically daring minor comeback How Big, How Blue, How Beautiful, which will finished much higher in our 2015 year-end rankings.

Cherry Picker's Best Bets: Send My Love (To Your New Lover), I Miss You, Million Years Ago, Sweetest Devotion

Here's the official videos for 25's opening two tracks - Hello and Send My Love (To Your New Lover).