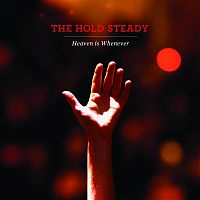 and the Springsteeny Boys And Girls In America

, and earning the moniker of best bar band in America (a moniker Titus Andronicus all but usurped in 2010), The Hold Steady have since found themselves struggling with the same issues that plague most band as they enter deeper into their career.

How to keep it fresh?

How to tweak their sound and stay interested without alienating the small but fervent fan base they've worked so hard to earn?

, they dabbled with odd instrumental arrangements previously out of character for the band; harpsichord on One For The Cutters

.  Unfortunately, aside from Discouraged, these forays into new territory were largely unsuccessful.

So 2010's Heaven Is Whenever finds the band still trying to address their midlife crisis, but in different ways.

Gone are the baroque instrumental arrangements...with the departure of keyboardist Franz Nicolai, this is the most guitar heavy, instrumentally straightforward Hold Steady effort since Separation Sunday

...and in their place are a few slower, almost countryish ballads, slick vocal choruses, and a whole lot of studio gloss.

Though criticized in other reviews, the ventures into a slower-paced, country feel really work for me, especially on the album's strongest track, nostalgic opener The Sweet Part of the City

, which achieves a winning, intentionally lazy vocal groove I haven't heard from the band before.

And for the most part, I also like the enhanced choral melodies.

Though they may diminish some of the band's punch (singer Craig Finn's lyrics often seem to bite best when his singing is at its worst), this is without question the band's richest, most accomplished album vocally.  The backing vocals add a warm sentimentality to Soft In The Center

and We Can Get Together

, and really lift Our Whole Lives

and fan favorite The Weekenders

But the production on this album...Uggh!

Studio gloss just doesn't fit this band, and here it is laid on in spades...super slick and soft around near every edge. That's not to say these songs don't rock, they do, but when some of your tracks, most notably Hurricane J

, are starting to feel more Rick Springfield than Bruce Springsteen, you've got a problem.

In the end, I do think most fans will find Heaven Is Whenever a small step up from Stay Positive

, maybe not as strong in the high points but definitely a steadier effort.

But for newcomers to the band, as I said regarding Spoon and their recent release Transference

, there are much better Hold Steady efforts to check out first.

Cherry Picker's Best Bets: The Sweet Part Of The City

, Soft In The Center

Here's an understated live-on-air performance of The Weekenders.


Component Breakdown:
1. The Sweet Part Of The City

- 8
Intangibles - Average to Low
To Listen, Download, or Purchase A CD or Vinyl Hardcopy,
Click on the Widget Below.

What was your take on Heaven Is Whenever?  Let us know in the comments section.
Posted by McQ at 7:38 AM