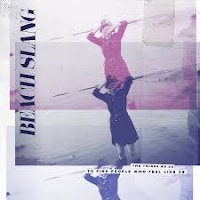 Coming in at #64 in our 2015 album countdown, is the full length debut from Philadelphia-based punk rock quartet Beach Slang.

Fronted by James Alex, a forty-three-year-old, chorduroy-loving singer/songwriter with an ginormous Paul Westerberg fetish, everything Alex and his band does seems to come straight out of The Replacements playbook,  particularly the 'Mats classic Let It Be / Tim / Pleased To Meet Me period.

And while I will grant you that to the classic Westerberg style Beach Slang has added an extra dollop of heavy guitar fuzz and over-the-top emoting, the truth is Beach Slang is at its own best - on songs like Bad Art & Weirdo Ideas, Hard Luck Kid, or the Here Comes A Regular-ish Too Late To Die Young - the more it sounds like the original Replacements. It's when Beach Slang starts to sound like a band unique to itself, as on the album's more emoish back half, that things tend to fall apart.

On the plus side, nearly every song on The Things We Do... bursts out of the gate with tons of pent-up, youthful energy, literally screaming "This Is A Rock Song!" The band truly does have that Replacement's anthem vibe down cold, and the album is much better produced than that of other popular contemporary punk acts (Japandroids, Cloud Nothings) playing in this same stylistic arena.

On the downside, while most of these songs are real collar-grabbers, many don't quite deliver on that opening power chord promise as they progress, and often, it's the heavier guitar fuzz, the one thing that genuinely differentiates Beach Slang from a straight up Replacements tribute band, that most gets in the way.  Add to that the fact that Alex, while wonderful at channelling Westerberg's classic angst,  possess little of Westerberg's lyrical wit, insight, dexterity, or left-field unpredictability, and you're left with an album that consistently gives the sense of being better than it really is.

Still a fun listen, though, and worth checking out for any fan of Replacement's style rock.

Just know going in that there's no inspired Androgynous, Answering Machine, or Seen Your Video zaniness to be found amonst these ten cuts.  Every song on The Things We Do is basically going for earnest Bastards Of Young uplift start to finish, and while a few come damn close to pulling it off, none quite match the impact of the original masters.

Here's the official video for one of the albums better tracks Bad Art & Weirdo Ideas.