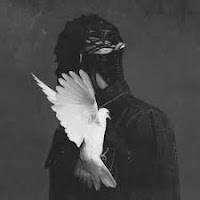 Originally intended as merely a sampler to a much bigger primary release tentatively titled King Push, fans of Pusha T, founding member of the celebrated Aught's Hip Hop duo Clipse and now president of Kanye West's Hip Hop label G.O.O.D. Music, have been forced to appease their yearings for that epic with this brief ten track prelude for now more than two years running.

And while Pusha has indicated in recent statements that a King Push release is imminent, the truth of the matter is there has always been plenty here on Darkest Before Dawn: Prelude to ponder while one waits.

Never a rapper interested the slightest in moral edification, this is a hard-edged record, focused on two things - the bullshit in the rap game, and life in drug trade (something Pusha has mucho first hand experience in), and while I only love one track on here, the super-sinister Keep Dealing, the album sustains a pretty cool vibe throughout, with beats that, as with his work with Clipse, are very spare but highly experimental, and after multiple listens tend to have a serious eureka factor.

And as a rapper, it's astonishing to me on this album how similar Pusha's flow is to Kanye's, but how also, in a subtle way, he's so much more melodic, which may be the reason he's able to pull off these songs with such minimalistic beats, a trick other, vocally flatter rappers could never pull off.

Case in point, album highlight Crutches, Crosses Caskets, which is basically just a drum loop, a little bass, and a few very interesting sound effects, but because of Pusha T's flow, the whole song carries.

The same thing could be said for the track that follows M.P.A.

So again, while not in love with a lot of the songs on this album, there are a lot of intangible factors at play here that King Push - Darkest Before Dawn:Prelude well worth multiple listens.

Here's the official video for M.F.T.R.