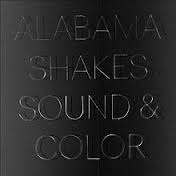 Description:  Let's get my one big negative in this review out of the way first so we can move on to the many positives there are to take away from Alabama Shakes' second LP Sound And Color.

To say that I've had issues with Alabama Shakes in the past - huge issues - is an understatement.

For me,  listening to their 2012 full-length debut Boys And Girls - big hit Hold On and second best song Be Mine aside - was a painful exercise, so glaring was the band's inability track after track to get decent Southern Rock ideas to coalesce into fully realized songs. Almost everything felt half-baked.

And while the songwriting is definitely better here, those issues still exist to a significant degree on Sound and Color.

There are a number of tracks here - Dunes, Guess Who, Miss You - that have that same unfinished/not-fully-thought-through feel, and a far smaller number (really just one song) that do feel fully realized.

But that said, it's important to remember one thing.

This is not a collection of seasoned studio stars that got together.

Alabama Shakes is a local, smal town band, formed very early in life, like U2, by a group of talented Junior High/High School friends with little formal training who've been taking their lumps and learning the ropes as they go.  True, they've received some guidance from some big time superstars, most notably White Strip Jack White, but there is still so much room for this band to grow, and viewed from the standpoint of artistic growth, it's hard to listen to Sound And Color and hear it as anything other than a huge step forward for the band.

Starting with the album's wonderful sense of stylistic adventure.

Where as Boys And Girls was a fairly straightforward Southern Rock affair, Sound and Color is all over the map musically, often in strikingly unexpected, weird ways, and all the better for it.

In that regard, the record reminds me very much of The Black Keys' 2010 release Brothers, another album that seemed locked in on exploring as many different instrumental textures it could shoehorn into its relatively classic style as possible.

From the so inviting electric keys (or maybe they're vibraphone or xylophone accents) that launch the opening title track, it's clear Sound And Colors is going to be exactly what the album's title suggests, a record about sonic palette, and through its twelve tracks we are treated to all manner of instrumental arrangements and mixing board trickery, from those striking opening keys, to Gemini's super fuzzed-out tones, to the chilled Duane Allmanish southern groove of Shoegaze, to the almost garage-y The Greatest.  And it all makes for a dynamic listen even when the songwriting struggles.

There is also an appealing greater emphasis on the soulful side of Howard's voice that can be quickly summarized as less hystrionics (though they're still hear in abundance), and more heart.

Best of all are this This Feeling, with its strikingly subtle verses, Gimme All Your Love, with its monster close-out, and the searing, stone-cold classic Don't Wanna Fight - which as the album's one fully realized song usurps Hold On as the best thing they've ever done and showcases just how much potential this band does have when they put it all together.

So again, while the band's songwriting inconsistencies prevent me from rating Sound And Color beyond a mild recommend, this is an adventurous record with above average intangibles, and from the standpoint of future promise, a tremendously encouraging record.

So here's hoping Sound And Color, to revive my U2 analogy, is Alabama Shake's October, and their War, Joshua Tree, and Achtung, Baby! are still lieing in wait around the corner.

Here's are the videos for...