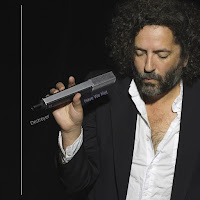 Now active for well over 20 years, eccentric Canadian singer/songwriter and one-time New Pornographer Dan Bejar has knocked out several fantastic albums under his Destroyer moniker, from 2006's glammy Rubies, to 2011's amazing, instrumentally lush 80s nostalgiathon Kaputt, to 2015's evocative, brass heavy, New York-celebrating Poison Season, and while for the first stretch of Destroyer's evolution the sonic template varied substantially from release to release, ever since Kaputt Bejar and his team of crack supporting musicians have locked on to a highly romanticized 80s solo Brian Ferry/Roxy Music Avalon synth sheen, and that is the case again on 2020's Have We Met.
Unfortunately, while the lyricism remains skillful, clever, and at time quite humorous, and the musicianship and production remain immaculate and perfectly dialed in to this very specific 80s vibe, the songs on Have We Met just don't land like they have on most of Destroyer's previous efforts.
Much is probably due to Bejar's decision to dial down the arrangements on Have We Met, going for a  relatively sparer, more intimate feel this time out, like walking in on some local hipster crooning to a near empty bar well after midnight, but whatever the thematic and stylistic intents (I suspect generating a sense of ennui was one of Bejar's specific goals), the end result is one of Destroyer's least impactful releases.
That said, there are still enough decent songs like opener Crimson Tide, the funky throwaway Cue Synthesizer, the instrumental title track with its late night vibe, and the melodic closer foolsong to almost justify, when combined with the ace production, giving Have We Met a low solid recommend, but the meh-ness of most of the rest of the material is ultimately too much to overcome.
So definitely a decent enough effort to recommend for established fans, but if you are new to Destroyer, with past releases like Rubies, Kaputt, and Poison Season out there, there are much better albums with which to start.
MILD RECOMMEND
Cherry Picker's Best Bets: Crimson Tide, Cue Synthesizer, Have We Met/The Man In Black Blues, foolssong.
1. Crimson Tide - 8
2. Kinda Dark - 7
3. It Just Doesn't Happen - 7
4. The Television Music Supervisor - 5
5. The Raven - 7
6. Cue Synthesizer - 8
7. University Hill - 6
8. Have We Met - 8
9. The Man In Black Blues - 7
10. foolssong - 8
Intangibles - Below Average
Here's a video of the album's best song Crimson Tide, which perfectly captures the albums "crooning to an almost empty bar well after midnight" vibe.
Posted by McQ at 10:13 AM