So far, in our look back at 1969, we've explored what a fantastic music year it was in the blues, progressive rock, conceptual pop, tropicalia, jazz, and jam rock.

But we're just getting started.

With our final themed mixes, we dive into the five sub-genres that pulsed with the most creative excitement in 1969, beginning here with our celebration of that year's incredible run of psychedelic soul.

James Brown, Sly & The Family Stone, The Temptations and Isaac Hayes were all on fire at this time: on the musical front, they could almost do no wrong.

And yet, even with these artists' sustained brilliance, their '69 works barely stand out here against our other inclusions from less well-remembered artists in songs like Edwin Starr's Twenty-Five Miles, Dyke & The Blazers We Got More Soul, and Donny Hathaway's The Ghetto.
Which is a big part of the reason why 1969 is my favorite year in funk and soul ever.
Doesn't hurt, either, that at this difficult moment in early June 2020, so many of these songs, sadly, still feel so vibrantly on point today.

So let's get started.  Here's the Spotify link. 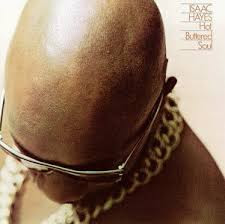 Isaac Hayes: Disappointed in the dismal performance of his 1968 debut Presenting Isaac Hayes, the future soul icon/Shaft superstar was ready to ditch any pretense of making it as a performing artist, and get back to his already established career as a house songwriter and producer for Stax.  But then Stax lost its entire back catalog in a split with Atlantic, and label executive Al Bell ordered all Stax artists to immediately get to work on new material. Hayes agreed, but only on the condition that he was granted full creative control.  He got it, and the result was a game changer. Enlisting the help of the Otis Redding's crack backing outfit the Bar-Kays, Hayes's sophomore outing Hot Buttered Soul contained only four lengthy songs, but the music had such an epic, aching, mature, emotionally grounded sweep, it threw the rest of the R&B world into a tailspin and set soul music's course for the next decade.  As the All-Music guide so succinctly puts it, after the release of Hot Buttered Soul, "Motown suddenly seemed manufactured, and James Brown a bit too theatrical." We're including two of the album's incredible recordings here, the amazing opening cover of Burt Bacharach's Walk On By, and in our encore, funk fest Hyperbolicsyllabicsesquedalymistic, with that one-of-a-kind mid-song piano-break that has to be one of the most frequently sampled funk moments in the history of hip hop. 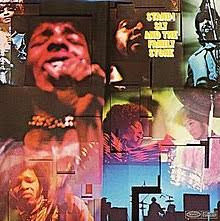 Sly & The Family Stone: There are few albums I've worn the grooves down on deeper than Sly And The Family Stone's most popular release and National Library Of Congress Registry member Stand!, easily one of my all-time favorite soul recordings.  We've already hit two of Stand's best known numbers with I Want To Take You Higher on Vol 2 - Best Of The Best and Everyday People on Volume 1 - Nancy's Favorites.  Here, we go real deep, tapping four more of the album's eight tracks - the title track, badass hit Sing A Simple Song, charming deep cut Somebody's Watching You, and one of my favorite upbeat graduation mix numbers You Can Make It If You Try.  Additionally, we're including the two of the Family Stone's three huge post-Woodstock '69 singles on this mix - Hot Fun In The Summertime, and the immortal Thank You (Fallettinme Be Mice Elf Agin), which closes this mix and was originally released as a double A-side single in December '69 with Everybody Is A Star. 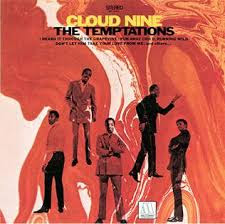 The Temptations: We're featuring multiple cuts from each of the Temptation's direction-changing '69 studio releases on this mix. First out of the gate, and the first Motown release to shift the label towards the funkier sound established by Sly & The Family Stone, was Cloud Nine (Solid Recommend).  Very much a Bringing It All Back Home-designed record, side two of Cloud Nine was Temptation's business as usual, full of the high quality smooth soul fans had come to expect from the band, albeit without the brilliant-but-problematic David Ruffin, whom the band had fired a few months earlier and replaced with the huge-voiced but less unique-sounding Dennis Edwards. But Cloud Nine's stunning side one, containing only three songs - the nuclear-powered, controversial "pot-as-an-inner-city-coping-mechanism" title track ('69's Grammy winner for best R&B Song by a duo or group), a cool reworking of the Gladys Knight approach to I Heard It Through The Grapevine, and the nine-minute Runaway Child Running Wild - was something else entirely, and set the tone for every Temptation album to follow over the next half-decade. 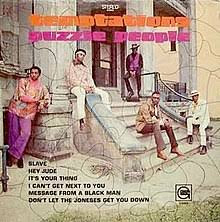 With studio follow-up Puzzle People (Solid Recommend), the band's principal songwriting/producing partner at the time, Norman Whitfield, moved things even further into the psychedelic/social messaging department. The end result was less consistent than Cloud Nine, but often more interesting, with classic hits I Cant Get Next To You and Don't Let The Joneses Get You Down and politically-pointed supporting tracks like the Say It Loud I'm Black And I Proud -riffing Message From A Black Man and epic closing track Slave sandwiched around covers of It's Your Thing, The Beatles Hey Jude, and old-school ballads like Since I've Lost You and Running Away (Ain't Gonna Help You). 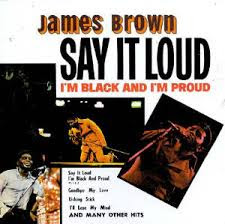 James Brown: So yeah, James Brown was a busy, busy man in 1969. They don't call him the hardest working man in show business for nothing. We've already discussed his second release of 1969, his Dee Felice-aided side-step into jazz and orchestral pop standards, Gettin' Down To It, on our Vol 7 - D. Smalls Jazz Odyssey. Now we take a look at his three significant proto-funk releases of 1969.
First up was his iconic Say It Loud, I'm Black And I'm Proud (Solid Recommend), which in addition to the title track (that was first released as a single in 1968), also included fan-favorite Licking Stick, but surprisingly, given the assertive implications of the album's title, most of the remainder of the album skews more in the vein of Brown's earlier 60's pop stylings. 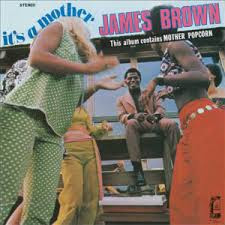 The real funk exploration would come with the near simultaneous late summer releases of Brown's It's A Mother (Solid Recommend) and its instrumental counterpart The Popcorn (Solid Recommend).
It's A Mother is Brown's standout release of the year. His most aggressive foray into funk at that point in his career, it really isn't even a collection of songs, but rather, a winning collection of improvised-in-the-studio grooves. And yet, despite the unplanned nature, It's A Mother has a highly cohesive feel, with Brown's ace backing band confidently following the fearless funk-master wherever he chooses to explore. We're going with two-part mid-album standout The Little Groove Maker Me to represent the album here. 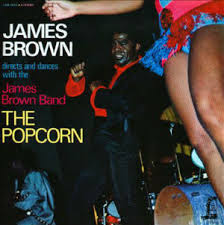 The Popcorn, represented by the the album's hit title track, hits many of the same funk sweet spots as It's A Mother, but here Brown slips into the background and lets his band take the lead in a slightly tighter, almost exclusively instrumental attack. Brown's vocal absence does drop the album down a notch from It's A Mother, but remains a fine listen in its own right. 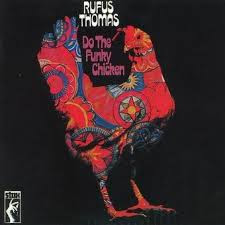 Rufus Thomas: The second of many Stax-based artists to make this mix, multi-talented, singer-dancer-DJ-MC-comedian Rufus Thomas is best remembered today as the man who started a thousand dance crazes, and of them, the Funky Chicken, may be his silliest (and greatest) creation. So obviously, we're going with the single that started it all, Do The Funky Chicken, which would later anchor his 1970 album of the same name. 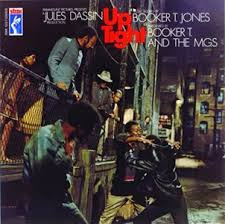 Booker T. & The M.G.'s: Probably best recognized today as the opening instrumental in the concert portion of the 1980 hit film The Blues Brothers, Booker T & The M.G's Time Is Tight was originally recorded by the Stax house band for another film soundtrack - Jules Dassin's 1968 film Up Tight - twice. Of the soundtrack's two versions, it is the down tempo, shorter version included here that became one of the biggest hits of The M.G.'s career, peaking at #6 in the '69 pop charts. 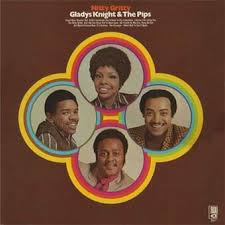 Gladys Knight & The Pips: After the Temptations, the Motown act quickest to up the funk factor had to be the irrepressible Glady's Knight & The Pips, who brought the new wave grooves big time with the title track and Friendship Train from their 1969 album Nitty Gritty. 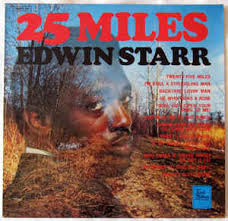 Edwin Starr: Edwin Starr had already experience regional and US chart success as one of the top talents at Detroit's Ric-Tic records throughout the later half of the 60s, but 25 Miles, the title track to his second album and first effort for Motown after Gordy Berry purchased Ric-Tic and its entire stable of artists, was the song that launched Starr internationally, going top 10 in the US and doing almost as well in other parts of the world. 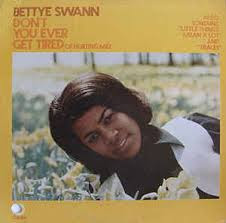 Bettye Swann: Louisiana-born, LA-based soulstress Bettye Swann is best remembered today for her '67 single Make Me Yours, but I've always loved her soul-reworking of Merle Haggard's Today I Started Loving You Again from her '69 release Don't You Ever Get Tired Of Hurting Me, so I'm including it here. 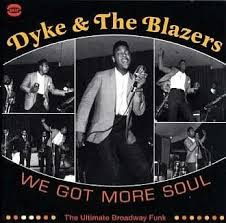 Dyke & The Blazers: Though he would be murdered just two years later, and his touring band had already formed and dissolved twice, Arizona funk-master Arlester "Dyke" Christian continued to record (and had several of his biggest hits, like '69 charter We Got More Soul included here) under the Dyke & The Blazers moniker by enlisting a rotating group of Los Angeles studio musician (which at times included Bill Withers and future Earth, Wind & Fire guitarists Al McKay and Roland Bautista) to join in extended jam sessions, which would then be whittled down CAN-style into '45 singles. 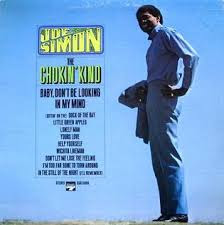 Joe Simon: Truth be told, as the most old-school R&B number on this mix, I originally had Joe Simon's The Chokin' Kind (from the album of the same name) earmarked for our Vol 8 - Grade A Schmaltz mix, but the song is so structurally similar to country artist Joe South's even better Walk A Mile In My Shoes that I moved The Chokin' Kind here to allow both songs the chance to better individually shine.  Interestingly, even though Simon landed a remarkable fifty-one different songs on the Billboard pop and/or R&B charts from 1964 to 1981, The Chokin' Kind here was his first song to ever reach #1 in either weekly poll. 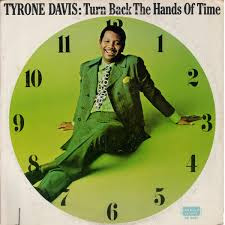 Tyrone Davis: Another artist who, like Joe Simon, doesn't seem to be as well remembered today but was a monster on the R&B charts for almost two decades from the late 60s until the late 80s, we're representing the Mississippi soul man with this early single Is It Something That You've Got from his 1970 full-length release Turn Back The Hands Of Time. 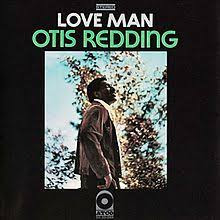 Otis Redding: Determined to keep Otis Redding's spirit alive (especially with the white counter-culture movement that had just begun to discover Redding around the time of his tragic late '67 death), Steve Cropper produced Redding's third posthumous album Love Man by mining the Stax archives for previously unreleased '67 material and bringing in his fellow MGs to flesh out the sound. The result, while not on par with Redding's phenomenal original recordings, is definitely one of the best of that seemingly never ending catalog of Redding posthumous releases. We're going Love Man's hit title track to represent the album here. 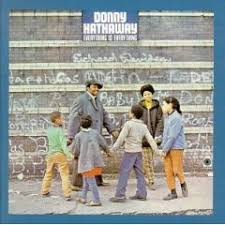 Donny Hathaway: Leading off our encore and closing out this write-up is the awesome, free form '69 lead single The Ghetto from Chicagoan Donny Hathaway's 1970 debut album Everything Is Everything. Similar to Isaac Hayes at Stax, Hathaway had already established himself as house songwriter and producer at Curtis Mayfield's Curtom Records before pursuing a career as an on-stage talent. Ironically, Hathaway co-wrote the single with his Howard college buddy, Leroy Hutson, who Curtis Mayfield would soon tap to take over as the new lead singer for The Impressions when Mayfield decided to leave the legendary vocal act in 1970 to pursue his own solo career.