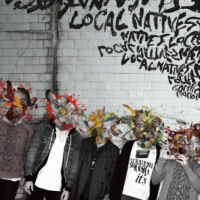 You would be hard pressed to find a band that did more to elevate their stock on the 2010 mega-festival circuit than Los Angeles-based Local Natives.
Preternaturally confident live performers, mining the same retro three-and-four part Crosby, Stills, Nash & Young-styled harmonies that have powered indie-contemporaries Fleet Foxes and Grizzly Bear (but plying those harmonies in a more uptempo, glossier, far more conventional fashion), they were a smash hit wherever they played.
On record, however, their impact is much more difficult to assess.
On the plus side, much of the material on this debut LP is excellent:  Wide Eyes

is a fantastic slow build of an opener, Sun Hands

an at times dazzling rocker, soaring ballad Who Knows Who Cares

is an absolute winner, and several other tracks are a lot of fun.
On the negative side, a hint of the generic permeates all of this material.  This band has great harmonies, but no discernible idiosyncrasies or personality. If one were to liken the major players in the late Aughts harmony wars to the cast of Broadcast News, if Fleet Foxes are the Albert Brooks reporter, brilliant beyond all the others but limited by self doubt and main stage performance anxiety, and Grizzly Bear the Holly Hunter producer, nearly Brooks intellectual equal, but buoyed by a more assertive personality and unwavering integrity, Local Natives are the William Hurt anchorman shallow, conventional, willing to cut corners to appeal to the masses, but in the end, no matter how hard one tries to knock them down, well-intentioned and an undeniable, instinctive natural.
So again, there's a lot to like here, and for those who gravitate towards harmony-powered folk rock, this is a must. But those who like their music with a lot of edge and personality...tread carefully.  For me, in the end, I cannot deny that this album is a lot of fun, despite my strongly-stated reservations.
Status: Solid Recommend.
Cherry Picker's Best Bets: Wide Eyes

, Who Knows Who Cares