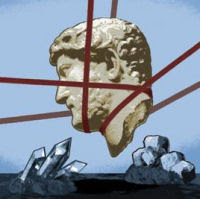 Following the mixed reviews that met their uneven, hyperactive, almost schizophrenic club-oriented third release Made In The Dark

, an album defined by extreme highs and lows (sometimes in the same track), Hot Chip has pulled a complete 180 on album number four, focusing almost exclusively on the ballad side of their twee electro-pop canon.

Unfortunately, the shift in direction does little to upgrade the quality of the material. The songs, many focused on the joys of marriage, are steadier this time out than on Made In The Dark, but also less interesting, and none of the many ballads here attain the great heights of second release The Warning's

I Was A Boy From School

or Look After Me

Hardcore fans, or those in the mood for an accessible electro-pop fix are still encouraged to check this one out, but for the rest of us, I'd download Alley Cats

and one or two other higher rated tracks and call it a day.


Component Breakdown:
1. Thieves In The Night