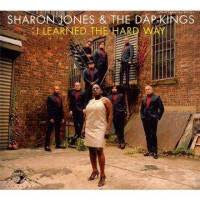 Sharon Jones is one of the best live performers on the planet...a force-of-nature entertainer with a fantastic, powerful voice and an agile-as-they-come seasoned stage presence who at 53 still packs more energy in her under five foot frame than a dozen kids half her age.

The Dap Kings, headed by bassist and Dap Tone Label owner Bosco Mann, are one of the best live bands on the planet, tight beyond belief, classic soul revivalists in the tradition of the best of the Motown/Stax/James Brown era.

The songs here, as written, are every bit on par with tracks from SJ&TDK's previous release, the excellent 100 Days, 100 Nights

Which is why this album is for me, despite still almost earning a solid recommend, one of the most frustrating disappointments of 2010.

Everything was in place for this album to be great, and at best, it's merely good.

I wasn't at the recording sessions, I don't know the band members, but it seems clear to me that Bosco Mann deserves most of the blame, for the record's fundamental flaw is blatantly obvious...an overbearing emphasis on band discipline and restraint so heavy handed it sucks the life right out of most of this fine material.

Throughout, the songs feel 8 beats a minute too slow, the instrumental flourishes too technically simplistic, as if the band had been forced to record in quicksand with one hand tied behind each of their backs. Listening to this album I begin to feel like the saxophone player in the film The Commitments, who desperately wants to bust out with some jazz touches to his solos, and is never given the chance. I wait for the band to take their foot off the brake and finally rip into one of these songs, and save for possibly the end of I'll Still Be True

Nowhere is this more apparent than on the track Money

, in theory a slam dunk for this band, a guaranteed A+ crowd pleaser that in the end never takes flight.

Sharon, to her credit, emerges relatively unscathed, and despite the negative tone of this review it should be noted that once the instrumental track The Reason

hits mid-record, things do pick up...sadly, just never to the level that this band, armed with these songs and this national treasure of a front woman, should have been able to achieve.


Component Breakdown:
1. The Game Gets Old