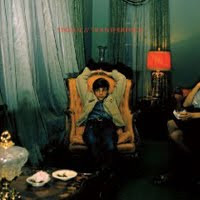 I guess it's a testament to Spoon's reliability that even though this is a very solid album, for me it's a big disappointment, because this is without question my least favorite Spoon album of the last ten years.

Transference finds the band stripping their sound way back after 2007's comparatively lush Ga Ga Ga Ga Ga (IMHO, the band's best album), and replacing it with an intentional off-kilter edge. The tracks here are far more jagged, many cutting off or shifting direction mid-passage, and while the austerity and the sharp instrumental edges of this stripped down approach are interesting and cohesive throughout, the overall energy level just isn't there.

Again, this is intentional. As the album cover clearly implies, the band seems primarily focused on constructing a growing sense of restless and twitchy ennui, but succeeding at this goal in and of itself doesn't make for a more satisfying listen.

To it's credit, Transference may be Spoon's most consistent album, the weakest tracks here seem stronger than usual, (by the simply nature of their spare, disciplined aesthetic, I personally feel every other Spoon album has it's share of snooze inducing duds), but there's no 10+ Spoon classic...no Sister Jack, My Mathematical Mind, or Don't You Evah caliber pleasure...to lift the album up into Spoon's traditional borderline strong recommend territory.

So, I'm probably being a little too harsh. This is still a very solid album, better than many acts will ever achieve, but don't go in with expectations too high, and if you're new to Spoon, I'd start with almost any other album of theirs than this.