It blew a massive hole in Coachella 2010's schedule, and of the dozen or so acts that ended up stranded on the other side of the Atlantic, none had I wanted to see more than Frightened Rabbit.

I loved their folksy, slightly U2ish 2008 break-up rant The Midnight Organ Fight, enjoyed their latest release The Winter of Mixed Drinks, and felt a number of the tracks from that album seem like inevitable live barnburners.  But it was not to be.  The band never made it.
So tonight was all about payback.  No volcano would stop me from seeing one of my favorite bands of the moment.
Things got off to a great start.  Before anyone even took the stage, I met a couple of really great guys, David, a sports promoter and huge Rabbits fan on vacation from New York, and Henry, a managing director for an LA media group, who was there with his wife.  Soon we were all wrapped up one of those enthusiastic who-do-you-like-here's-who-I-like music conversations one only experiences between sets at concerts, and the four of us ending up hanging out the entire night.  Great meeting you guys, made the show even more fun. 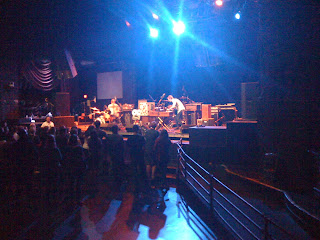 Ohio's Bad Veins took the stage first, and since it's just a drummer and a guitarist, I assumed we were in for another set of no-fi punk, until I saw the forty-year-old reel to reel recorder on a chair between them. The guitarist/singer hit play, and what transpired was much more Muse/Radiohead styled anthem making than No Age lo-fi muck.
Now I'm a huge real instruments guy when it comes to live performance, not a big fan of watching DJs or bands that play to track.  But by putting that big old-fashioned reel to reel upfront on stage, tacitly copping to the non-human third band member, the effect was kinda cool, and I came away impressed with the band's music. 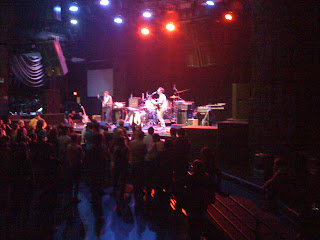 Canada's Plants and Animals was up next, and as stoked as I was for Frightened Rabbit, I was equally pumped to see this band for the first time.
Their inventive 2008 release Parc Avenue had a number of excellent tracks in a variety of styles, from the straight-up heartland rocker Feedback In The Field, to the moody Good Friend, to the jazzy jam Mercy, as well as a number of other excellent, longer, proggier tracks.
Unfortunately, crowd and band were not to gel on this occassion.
Anyone familiar with L.A. concert going knows that (no use sugar coating it) L.A. crowds are the worst...everyone at the show thinks they're more important than the band they've come to see and no one ever shuts up.  Bad Veins managed to go on before most of the crowd had arrived, but by the time Plants and Animals got on stage, Frightened Rabbits cadre of younger female fans had arrived, and for an act like Plants and Animals that veers frequently between rocking and quieter material, the background chatter was truly oppressive.
To their discredit, however, Plants and Animals were complete lunkheads about it, making no effort to guage the crowd.
A shame.  Of all the bands that played that night, it was clearly evident they're collectively the most talented ...strongest chops by a wide margin, able to play a far broader range of styles.  But there's also a cocky, disinterested, Frat Boy vibe to these gents...they seemed perfectly content to just play to each other and ignore the crowd, which was ignoring them right back.  I was screaming for them to whip out Mercy or Feedback, high-energy songs that would have immediately pulled the crowd into the show, but they just kept on chugging with their longer, more difficult numbers to process like Faerie Dance as the Chatty Kathies drowned them out.
Very disappointing set.  Hopefully, these guys get a clue about reading their audience right quick, because they have the talent to be major players on the indie scene, and are committing career suicide if they don't. 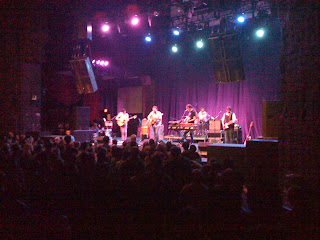 Frightened Rabbit finally came on around 9:45 and immediatley launched into a fine rendition of Nothing Like You from Mixed Drinks. Now a five piece after having recently expanded from a trio, the band sounded great, but make no mistake, unlike Plants and Animals, which is clearly a three-headed democracy, this is lead singer Scott Hutchinson's band start to finish.
Scruffy, doughy, coarse, affable, and as witty and quick to enter into conversation with the audience as Swell Season/Frames frontman Glenn Hansard (but with a more facile, less hyper-active presence). Following the opening number, he waxed with genuine excitement about having met Tom Hanks the night before, and then it was off into a rollicking version of Organ Fight's Old Old Fashion. 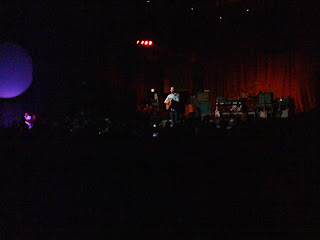 What followed was a lively, thoroughly enjoyable, if only occaissionally spectacular push through most of the material off of their last two albums.  Specifc numbers from each record shined. My Backward's Walk really pulled the crowd in, and a riveting acoustic solo rendition of Good Arms Vs. Bad Arms (pictured at right) was the unquestionable set highlight until the bands final two songs before the encore, a fabulous Living In Colour, and then a beyond ass-kicking take on their most U2ish track, the foul-mouthed but moving epic of romantic craving Keep Yourself Warm.
Encore included an uplugged take on Poke, and the band wrapped things up nicely with a passionate version of Mixed Drinks' The Loneliness and the Scream.
Aside from possibly the members of Plants and Animals, who probably didn't care anyway, a great time was had by all.
Here's rooting they get their live act together, and that that damn volcano does nothing to prevent all three acts from having fabulous showings at Coachella 2011.
Posted by McQ at 1:05 PM