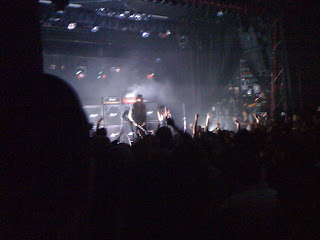 Okay, so my first concert photo is less than awesome, but let's not let that detract from the wall-of-sound blitzkrieg Sleigh Bells threw down for a lively L.A. crowd Wednesday night, October 20th at the El Rey.

Opening with a one-two sledgehammer of Tell 'Em and Infinity Guitars that immediately got the audience going, and then maintaining a ridiculously high energy level throughout a very quick (33 minutes by my count) performance of material from their inventive summer-pop-meets-industrial-noise debut Treats, Sleigh Bells only took their foot off the accelerator once, for their gorgeous pop song Rill Rill.  At that point, having already suffered serious hearing loss, I thought to myself "what a great way to split this set."  Moments later, Alexis Krauss let us know they had only two numbers left.  The next track, Straight As, lasted all of forty-five seconds.

I wondered if this is what seeing the Ramones in their twenty-songs-in-twenty-minutes heyday had been like.

Sound was an issue throughout the performance, so high was the volume.  A friend I was with actually thought one of the speakers blew.  I couldn't tell because my fingers were in my ears protecting frequency ranges I wanted to keep, but the mix was decidedly muddy throughout.

In the end, neither sound quality or set length mattered much, so fervent and infectious was the band's energy.  Guitarist Derek Miller attacked his axe as if he was trying to top Pete Townsend with every note, and Krauss was spirited and quite charismatic throughout.

It will be interesting to see how much more Sleigh Bells can milk this unique core approach.  As charismatic as she is, Krauss has her limits as a vocalist, half her repertoire seemingly restricted to breathy come-on grunts, and I just don't see how many more albums of this type of material the band will be able to produce and maintain listener interest without bringing more melody, variety, and traditional craftsmanship into the mix.

But as the lights went up and the satisfied crowd hit the street, I don't think anyone cared.

For this night at least in Los Angeles, Sleigh Bells brought down the house.

Sleigh Bells were preceded by young Colorado DJ Picture Plane who had a slightly dub-steppy, Burial-esque vibe, and garage-punk outfit The Sun Dells (sp?).  Enjoyed 'em both, especially the Sun Dells, though neither impressed me enough to think there's bigger things on the horizon for them.  Sorry guys, hope I'm wrong.

For me, though, the other star of the night was the between-set vinyl spinner DJ Anna.  Talk about having your music history down pat.

From the moment I walked in to the Velvet's Who Loves The Sun, she laid down a back and forth groove of old time classics (Wouldn't It Be Nice, The Stooges I Wanna Be Your Dog, Beefheart's Yellow Brick Road, New Order's Age of Consent, Talking Head's Psycho Killer) and contemporary gems (The XX's Chrystalized, Yeasayer's Madder Red), that felt like a perfectly-constructed and thematically-linked medley of influences on the Sleigh Bells' material to come.

If you're in L.A. and hosting a big party, I highly recommend tracking this girl down.
Posted by McQ at 11:49 AM