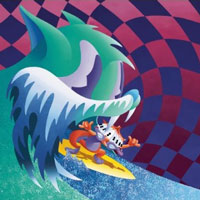 Let's not mince words.
MGMT's sophomore LP Congratulations, despite the presence of a few marginally appealing tracks, is a flat-out failure.
One of the worst, if not the worst, releases by a popular indie act in 2010.
But instead of piling on, let me just say two things in the band's defense.

First, no one who has followed MGMT should be surprised.

A notoriously indifferent live act, their entire rise to prominence has been fueled by three (and only three) singles from their 2008 debut Oracular Spectacular...the addictive, hooky Kids, the almost as good Prince-like funk-out Electric Feel, and the snarky but amusing Time To Pretend.

But had critics in 2008 actually listened to the rest of Oracular before rushing to put the album on their year-end "Best Of" lists, they would have realized the rest of it, with the possible exception of the decent Weekend Wars, was simply dreadful.

Much like the briefly popular 90s act The Spin Doctors, whose best-selling debut Pocketful Of Kryptonite also boasted three great singles and absolutely nothing else, all tells pointing towards a creatively limited future for MGMT were already abundantly present.

Which sadly, brings me to my second point.

I actually love what MGMT was trying to do here.

In going for the quirky, off-beat, under appreciated light psychedelic feel of B-tier 60s classics like Love's Forever Changes

, Something Else By The Kinks

, or most similarly, The Zombies Odyssey and Oracle

They're just completely unable to pull it off.

As I said earlier, a few of the tracks are slightly appealing.

Flash Delirium is fun, the title track has a nice wind-down vibe, and I have to admit the idea behind Brian Eno. recasting it's titular character, David Watts-style, as the spitefully envied golden boy of the art-rock schoolyard, is genius.

But in the end, I feel even the band's most ardent fans will want to think twice before putting any money down for Congratulations.

Very little on this album works.

What are your thoughts on MGMT's Congratulations.  Let readers know with a comment!
Posted by McQ at 8:00 AM