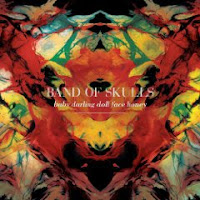 Do you long for the days when encores were instigated by Bic lighters, not glowing cell phones, and marijuana and LSD, not X and meth, where the young concert-goer's hallucinates of choice.

Do you like your music heavy, drenched in wah-wah feedback and molten riffs, and stripped free of any pansy-ass synths?

If your answer is yes to any of these questions, then Band Of Skulls is the band for you.

Fronted by dueling male/female lead vocalists Russell Marsden and Emma Richardson, this young  Southhampton power trio initially drew comparisons to the White Stripes, and while I get the comparisons (vocally, Marsden often comes across as a poor man's Jack White), it only takes one listen to their debut Baby Darling Doll Face Honey to realize they are drawing their inspiration from influences much older.

Conjuring the spirit of near every early metal or heavy psychedelic act of the late sixties/early seventies...from Led Zeppelin to Cream to Lynyrd Skynyrd, Big Brother and the Holding Company to Ten Years After to Black Sabbath...Band Of Skulls Baby Darling Doll Face Honey offer listeners a return to the incipient days of classic hard rock, classically done.

But unlike contemporaries Grinderman, The Dead Weather, or Tame Impala, who are clearly employing these classic sounds to explore new sonic or personal territory, Band of Skulls are not explorers, or even just alchemists. They're classic rock purists.  Their goal, as it was with Wolfmother a few years back, is simply earnest reproduction of the types of songs they love.

From the opening notes of Light Of The Morning

, which feels lifted straight from the Led Zeppelin II

outtakes, through the jaunting Cream-like I Know What I Am

, every moment on Baby Darling Doll Face Honey echos back to those songs of yore.

I found it all too reverential and derivative at first.

But with repeated listens I found myself caring less about how closely these songs mirror their influences,  and more about how strong Band of Skulls is at delivering them.  I caught them live at Coachella 2010, and while hardly the most charismatic of bands, they are excellent players, and possess a to-the-marrow dedication to this type of material that really shines through on this record.

So, like I said, if you're in the mood for some classic heaviness, classically done...Band Of Skulls is the band for you.

Here's the video for single I Know What I Am.


Component Breakdown:
1. Light Of The Morning

- 9
Intangibles - Average
To Listen, Download, or Buy a CD or Vinyl Hardcopy,
Click on the Widget Below

What are your thoughts on Baby Darling Doll Face Honey? Let's us know in the comments section.
Posted by McQ at 8:00 AM