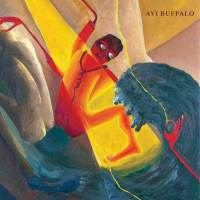 Man, and I thought The Xx were young!

At least they had the decency to start college first before wowing people with their debut.

If you've heard anything about Long Beach's Avi Buffalo, it's probably how young they are...how, as this winning album's sweet-natured liner notes imply, some of its songs were recorded before singer/principal songwriter Avigdor Zahner-Isenberg had even reached his senior year in high school.

But give this album a proper spin or two, and any cynical thoughts regarding the band's age (despite the youthful, occasionally crude lyrics) quickly give way to a realization of just how great the musicianship is on this record.  The band may work in a simple pop milieu (MGMT meets The Shins seems to be a common description), but boy, can they play.

At the heart of it all is Zahner-Isenberg's subtle but incredibly versatile rhythm and lead guitar work.  Even on this album's weaker tracks, I find myself totally captivated by his inventive supporting techniques, and the few times he cuts loose, as on the back half of Can't I Know?

, the results are  spectacular.

To be quite frank, the extended end to Remember Last Time

But it's not all guitar flash here.  This is also an album, once one adjusts to its idiosyncrasies (which admittedly does take a few listens), that is chock full of pop hooks.

are all compelling little numbers, but the real stunner is What's In It For?

, one of my favorite pop songs of the year.  With its engaging melody and wonderfully offbeat but instinctive backing vocals, it's the kind of song an older band with more experience and musical self-awareness would never think to make.

So if you're in the market for something quirky and breezy and fresh, with a lot of great guitar work thrown in as an added bonus, be sure to check out Avi Buffalo.

Here's hoping these kids don't grow up too fast.

.
Here's the video for my personal favorite What's In It For?

- 7
Intangibles - High
To Listen, Download, or Purchase a CD or Vinyl Hardcopy,
Click On The Widget Below.
What are your thoughts on Avi Buffalo?  Let reader's know in the comments section below.
Posted by McQ at 11:36 PM