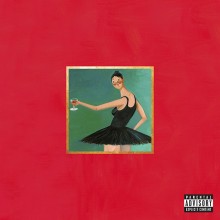 Compared to the rest of blog-o-sphere, I'm six months late reviewing this gargantuan, so let's just skip the details for a moment and get right to the hyperbolic superlatives.

You may hate him, you may despise his childish, petulant, boorish, egomaniacal public behavior and sometimes deplorable twitter posts, but make no mistake, Kanye West's My Beautiful Dark Twisted Fantasy is one of the greatest rap albums of all time, an impossibly huge sounding, contradictory, emotionally naked, game-changing beast that boasts some of the most inventive high-gloss rap beats ever dropped, and in its omnivorous hunger to incorporate so many musical influences worldly and/or white, portends to a historic sea change in the direction of African-American music.

"Keeping it real" will never have quite the same cache in the world of rap again.

And as much as it kills me to bump The National's flawlessly executed High Violet from the top spot for 2010, I have to do it.  .

I love both albums to death, but picking High Violet over My Beautiful Dark Twisted Fantasy is akin to picking Earnest Borgnine's Marty over The Godfather for best picture....both are wonderful, but one is so much more.

From the opening minute of lead track Dark Fantasy, with its Disneyesque, Nicky Minaj, faux-brit intro that leads into the grand, choral importuning of "Can we get much higher?" and then Kanye's first rap, all of the album's qualities become clear.

First, My Beautiful Dark Twisted Fantasy is going for maximum impact one-hundred percent of the time.

Many quieter, more reflective moments will follow, both nothing here will play small.

The record's list of collaborating artists is endless, and yet, Kanye manages to weave them into the whole as well as on  any rap album I've ever heard, while still granting these contributing artists not just a chance to shine, but definitive star-making turns (Nicky Minaj's rap to close Monster is quite simply for the ages, and after this album, I doubt there's a black man in American who doesn't now know who Justin Vernon is).

Third, if the album does have a flaw, it's that the beats are so gigantic and so adventurous the raps are sometimes overwhelmed by the album's sheer musicality.

Even though this is easily Kanye's best vocal performance to date, the record does occassionally feel out of balance.  The is particularly the case on Dark Fantasy, where Kanye's verses are no match for that surging chorus.

Finally, it quickly becomes apparent Kanye is audacious enough to believe he can lay claim to Michael Jackson's throne as the "King of Pop" and forever certify his "street cred" at the same time.

This is simultaneously Kanye's poppiest and crudest release to date, moments of vivacious, teeny-bopper pleasing joy, followed by a Chris Rock monologue on a girlfriend's improved vaginal technique that no parent in their right mind would ever let their children hear.

Some will inevitably be put off by the vulgarity and the "Trumpian" levels of egotism, but what emerges over the album's narrative, interestingly enough, is more-or-less a contemporary hip-hop take on Amadeus, only told from the perspective of what it's like to be the immature, emotionally stunted but preternaturally talented Mozart instead of the knowing but limited, envious Salieri.

For over seventy minutes, Kanye raps all about Kanye, all of the time.  But I didn't mind, for unlike most rappers, Kanye is willing to drop the genre's traditional braggadocio and open up to moments of profound naked vulnerability, as on Runaway, where he admits his fears that his muse-driven personality, over which he feels no control, is leading him down the path of an empty, loveless life.

But despite these admissions, in the end it's in the music...those glorious, inventive, genre-mashing, hyper-produced beats...where My Beautiful Dark Twisted Fantasy's greatness is most fully revealed.

From Power's undeniable tribal chant to All Of The Lights' sledgehammer clubland attack, Runaway's plaintive Elton John single-note piano solo calling Kanye away from a life of emotional connection to the breathtakingly romantic blues guitar that kicks in at the 2:50 mark of Devil In A Blue Dress, the album is an unrelenting onslaught of career-defining peak moments, concluding with a two song sequence (Lost In The World and Who Will Survive In America) so prescient and staggering, I'm holding off commenting on it till I add it to the my Favorite Tracks of 2010 page.

And on and on and on it goes with My Beautiful Dark Twisted Fantasy. South Park had their fun with Kanye and his "genius complex," but here, he backs it up every step of the way.

There's still more I could say, but unfortunately, I've run out of complimentary adjectives.

So let's just leave things at I kinda liked it, and in the odd chance that you haven't already heard My Beautiful Dark Twisted Fantasy, I'll let you discover the rest.

, Lost In The World

/Who Will Survive In America

Here's the abbreviated official video for Power, which gives a good indication of the level of humility on display throughout My Beautiful Dark Twisted Fantasy.

What are your thoughts on My Beautiful Dark Twisted Fantasy? Let readers know with a comment.
Posted by McQ at 8:10 AM