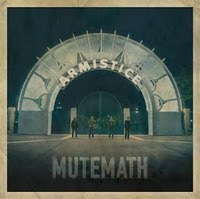 Let's start with the obvious.

From the not-even-fit-for-the-cutout-bin artwork (seriously, bearded dude in the blue jacket and tie, you're going to have to live with that inset photo being out there publicly the rest of your life), to Paul Meaney's effective but oh-so-generic bluesy tenor (the type only teenage girls and Simon Cowell could love), to the music that seems determined to simultaneously honor every semi-mainstream cheeseball  prog rock act that's ever come before (from Spirit and ELP to the 70s Styx/Kansas/Foreigner to the 80s Asia to such contemporaries as Muse, Keane, and Minus The Bear), everything about Mutemath and Armistice screams "NOT TO BE TAKEN SERIOUSLY (even though they want to be)!!!!"

I mean, what band proclaims that the point of their new release was to "embarrass" their previous effort?

The band is just such an easy target.

But if truth must be told, even though I spent my whole car ride home cooking up mean-spirited zingers for this review, I thoroughly enjoy this album.

It is just a ton of fun.

From samey, silly, but positively swaggering rockers like the The Nerve

, to surprisingly effective ballads such as Pins and Needles

the album offers a near nonstop salvo of critic-baiting tunes you won't be able to stop humming even as you prepare to publicly mock them.

And it should be stated, no matter what one considers the merits of the individual songs, the drumming and the production on this album are phenomenal.

So I say let down your rock-snob defenses, channel your inner Lou Graham or Tommy Shaw, and give Armistice's guilty pleasures a try.

I promise you, you'll be happy you did.

Here's the video for Spotlight

- 8
Intangibles - Cheesy
To Listen, Download, or Buy a Vinyl or CD Hardcopy,
Click on the Widget Below.

What did you think of Mutemath's Armistice?  Let us know in the comments section.
Posted by McQ at 1:18 AM