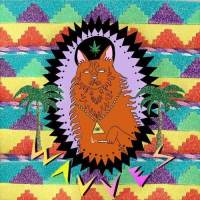 Okay, let me confess up front that I'm not crazy wild for any of the lo-fi surf punk acts that came into indie prominence in 2010.  Best Coast, Surfer Blood, Fang Island, Wavves, they all produced some fine songs...but none of them blew me away with their full length LPs.
That said, of the bunch, I probably like this ragged sophomore release from Nathan Williams, aka Wavves, the best.
He's by far the most limited vocalist of the lot (despite possessing a classic punk whine), and the melodies here aren't nearly as strong as on Astro Coast

or Crazy For You, but in their stead stands far greater instrumental muscle (Williams was backed on this effort by former Reatards Billy Hayes and Stephen Pope), and a far more eclectic and adventurous range of material.
Recording in a bona fide studio for the first time in his young career, Williams takes a stab at nearly every indie "style-du-jour":...a touch of chillwave on Baseball Cards, oddball twee pop on Convertible Balloon, a power-punk ballad with the excellent Green Eyes, and Beach Boy-tinged harmonies on the dense Mickey Mouse (a track that would have felt right at home on Animal Collective's Merriweather Post Pavillion

).
But despite the success of some of these left field ventures and the nice variety they add, the album still works best when Williams does what he does best...delivering grungy, disaffected, dope-obsessed, quasi-tuneless, surf-punk anthems.
Taking on an almost Nirvana-esque feel at times, powered by explosive guitars and bionic drum fills, hard hitting tracks like King Of The Beach, Idiot, and Post Acid are the definite highlights here.
So if you're in the mood for some decent, high energy, snot-nosed slacker pop, come on down to the shoreline, pay your homage, and give Wavves' King Of The Beach a try.
Status: Mild Recommend.
Cherry Picker's Best Bets: King Of The Beach