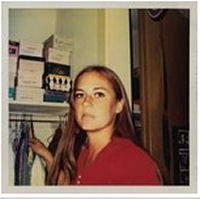 Truth be told, I wept inside when I first heard this album and realized who was behind it.

Delivering a feedback drenched sound that combined the psychedelic punch of 60s power trios like Cream or the Jimi Hendrix Experience with the sassy vocal wallop of early female-fronted punk acts like The Pretenders, the band was an absolute monster live, and at the center of it all was young Gundred, barely out of college, smashing away on the drums and wowing everyone with her brilliant phrasing and gigantic, one-in-a-billion, Chrissie Hynde crossed with Janis Joplin voice.

Simply put...she is an immense performing talent, born to PLAY IT BIG, and the mere thought of her sublimating that talent in the service of the same restrictive, no-fi trendiness that every other band on the planet is pursuing right now left me with a heavy, heavy heart.

But the fact of the matter is, as far as no-fi releases go, this might be my favorite of the year.

A big part of the reason is that unlike most of the other prominent no-fi acts...No Age, Japandroids, Vivian Girls, Abe Vigoda et al...Gundred (or I guess I should call her Dee Dee now, the persona she performs under with this act) seems to recognize the difference between downgrading a mix for feel and downgrading a mix to the point of obfuscation.  Instead of creating a barrier the listener must work through, as the mixes on the albums of those other artists typically do, the mix on I Will Be is actually one of the album's biggest selling points, lending it an appealing, Nuggetsy, 60s garage rock vibe but never getting in the listener's way.

Check out the fuzzed background guitar whine that powers the instrumental bridges of Bhang, Bhang, I'm A Burnout

and you'll hear exactly what I'm talking about.

Second, this album isn't nearly as much an exercise in sellout trendiness as it initially seems.

Dee Dee actually wrote and recorded many of these songs on her own, in her bedroom, back in 2008, before this no-fi movement really took off, and much of the material is dedicated in a heartfelt manner to her mother, whose youthful picture adorns the album's cover.

And finally, there's the songs.

While only the fabulous Oh Mein M

even hints at what Dee Dee is capable of vocally, they are a very consistent lot, well-structured and strong on hooks and pulpy 60s verve.  A bit more variety in the material would have been nice, but the album blows by in such a hurry (less than thirty-minutes),  one hardly notices.

So, for now, while I still hope Gundred plans on tapping back in to her more explosive talents down the line,  I have to give Dum Dum Girls I Will Be an enthusiastic nod.  It's a very solid listen.

Here's the video for my favorite track from the album, Bhang, Bhang, I'm A Burnout


Component Breakdown:
1. It Only Takes One Night

- 8
Intangibles - Average
To Listen, Download, or Buy A Vinyl or CD Hardcopy,
Click on the Widget Below.

What did you think of the Dum Dum Girl's I Will Be?  Please share your comments.
Posted by McQ at 8:00 AM