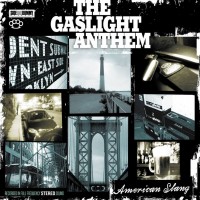 Let's face it, the last decade has brought us tons of great music, but in this era of synthesis, outside of some movements in electronica and dubstep, and maybe some of Animal Collective's more "out-there" efforts, very little of that music has been shockingly original.

That said, I still can't think of a contemporary act that  forces the listener to make the choice between competence and originality more completely than New Jersey's The Gaslight Anthem.

As pure a 50/50 mix of two past acts as you will find, The Gaslight Anthem enthusiastically combines Bruce Springsteen's vibe and earnest, soulful blue collar hero worship with the early Replacements harder-rocking, punkier musical charge. The 50/05 split applies to the vocals as well, with leader Brian Fallon conveying Springsteen's emotive warmth and Paul Westerberg's gravelly snarl in equal measure.

And as presented on this album, their best to date, it's a mix they've clearly mastered.

At every moment the instrumental turns are sharp, the vocals crisp and effective, the band proving themselves fully capable of delivering all of the twists common to this genre with skill, soul, and aplomb...and yet, it's all so freaking derivative, not a single moment on this album feels like their own.

Despite the familiar sound, the problem isn't with the music.  This album rocks.

But the lyrics, oh boy.

Unlike other contemporary waders in the E-Street pool like The Hold Steady or Titus Andronicus, acts fronted by top-tier lyricists who will mine Springsteen's work for sound but thematically are off exploring worlds and styles of delivery utterly unique to themselves, Fallon's lyrics couldn't be more paint-by-the-numbers.  His tales of old haunts, romance, and youthful nights on the streets mirror Springsteen's so fully in their telling that they come to feel as disassociated from personal experience as Leonard Cohen's Hallelujah does springing from the mouths of all those pre-pubescent contestants on American Idol.

As such, the whole album, no matter how well-constructed the music, ends up feeling like an exercise in mimicry rather than self-expression.

Still, the music is often enough, particularly on the Wild Nights-flavored The Diamond Church Street Choir, which is so wonderfully arranged and executed, one must surrender to it wholesale, lyrics be damned.

In the end, I think how much music you listen to will play a big part on how much you like American Slang.

If you are an infrequent purchaser of music, or gravitate towards old-fashioned, 70s/80s-flavored mainstream rock, this could be one of your favorite albums of the year.

But if you're a voracious listener, well versed in the works of Springsteen, The Replacements and the younger indie acts I mentioned above, and someone who holds originality in high regard, I think you will  often find the derivative nature of this music hard to stomach.

I'm giving it a mild recommend overall.  Musically, it's an easy solid, but as I have repeatedly said, those lyrics...oh boy.

Here's hoping these talented Jersey gents chose to explore a mythology of their own making the next time out.

, The Queen Of Lower Chelsea

Here's the official video for the title track, American Slang.

What are your thoughts on The Gaslight Anthem's American Slang?  Let readers know with a comment.
Posted by McQ at 8:10 AM