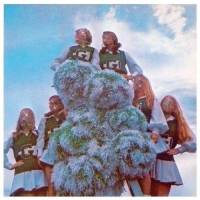 The most fascinating thing about Sleigh Bells' groundbreaking 2010 debut Treats (aside from its high-octane, noise-fueled bravado), is that it wasn't made by someone else fifteen years earlier.

All of its contextual elements...the breathy, beachy, sugary girl-group vocals, the heavy metal riffage, the sledgehammer industrial clatter...have been in play since the advent of Nine Inch Nails/Ministry/Throbbing Gristle.  But credit must be given to songwriter/guitarist Alex Miller and vocalist Alexis Krauss for having the vision to combine these elements in a truly unique way for the very first time.

Coming on harder than a Mike-Tyson-before-Buster-Douglas roundhouse, Treats is all volume, all peak crescendo, all sonic abuse almost all of the time.  Songwriting and melody take a definite back seat, but the album's energy and blitzkrieg pacing and Krauss's cooing vocals are so infectious, it hardly matters.  Once Treats gets revved up (which by my count takes all of three seconds into opener Tell 'Em), it's a near impossible album to resist for anyone who likes their pop with more than just a dash of adrenaline.

Structurally, the album is divided into thirds, opening and closing with rapid fire four song stretches that highlight the act at their most aggressive, and then pausing briefly in the middle for a calmer, moodier three song stretch that starts with the oddly beautiful electro-tinged Run The Heart, and concludes with pop song of the year runner-up Rill Rill, which re-purposes an old Funkadelic groove to glorious effect.

So if your in the mood for something balls-out noisy, but also exhilarating, fun and utterly new, I'd give Treats a serious, serious listen.

It's not quite the best album of the 2010, but it very well may be the most original.

, Crown On The Ground

What are your thoughts on Sleigh Bells Treats?  Let readers know.
Posted by McQ at 8:10 AM